An incoming storm is expected to bring close to a foot or more of snow to much of northeastern Colorado Monday night into Tuesday, including in the Denver metro area and northeastern plains. Denver7 has meteorologists, reporters and photojournalists scattered across northern Colorado covering the incoming snowstorm and will have live coverage on the storm on-air, online and on streaming devices through the day Tuesday.

UPDATE (5:30 a.m. Tuesday): Several areas of Colorado are waking up Tuesday to more than a foot of snow on the ground, with more expected into the afternoon. Blizzard warnings are in effect for the southeast metro area and many of the counties on the northeastern plains until Tuesday evening.

--Updated forecast
--More on what to expect
--Live blog

DENVER – An incoming storm is expected to bring close to a foot or more of snow to much of northeastern Colorado Monday night into Tuesday, including in the Denver metro area and northeastern plains.

The National Weather Service, Colorado Department of Transportation and Denver International Airport are all urging holiday travelers to adjust their travel plans if they plan to hit the road or airport on Monday evening or on Tuesday. Officials said that travel could become nearly “impossible” at times – especially Tuesday morning.

Shovel trouble on the double! Plus another storm due late in the week! Watch Denver7 for all of the details! @denverchannel #cowx #HolidayStorm pic.twitter.com/V3jqMnwBgm

“People planning travel in northeastern Colorado tonight or Tuesday should consider traveling today or waiting until the storm passes,” the NWS said Monday in its winter storm warning forecast. “Travel may become impossible across the I-25 urban corridor and across the plains from I-70 northward by Tuesday morning, including unplowed city streets with a foot of new snow on them. You should have what you need for a day at home on Tuesday.”

Many of the airlines that operate at DIA are offering travel waivers and adjusting their policies ahead of the storm, which is expected to snarl travel for at least a day at one of the nation’s busiest airports. Click here for more information.

We will be tracking school and business closures as they come in on Monday ahead of the storm, though many of the districts in the area are already off this week for the holiday. Any closings and delays will be posted here.

Winter storm warnings are in effect for most of northeastern Colorado and the central mountains, with at least 6 inches of snow expected in those areas through Tuesday, and locally higher amounts along the northern Front Range and in the foothills.

The snow is expected to move into northern Colorado after noon Monday and gradually move south and southeast – first into the Fort Collins area and then down toward Boulder and the metro area.

A rain and snow mix is expected to begin in Denver and the surrounding area between 4 and 5 p.m. and will gradually change over to snow. The foothills could see snow earlier than Denver, and by 8 p.m., the snow is expected to be widespread across northeastern Colorado.

The National Weather Service said late Monday morning that snowfall rates could be up to 2 inches per hour overnight in the northern foothills, including Fort Collins, Greeley, and south into Boulder.

Rates in downtown Denver and near DIA will be 1 to 1 ½ inches per hour between 9 p.m. Monday and the early morning hours of Tuesday, the NWS said.

Snowfall totals will depend on when upslope winds arrive in earnest and other factors, but here’s a look at possible snow totals, from the NWS: 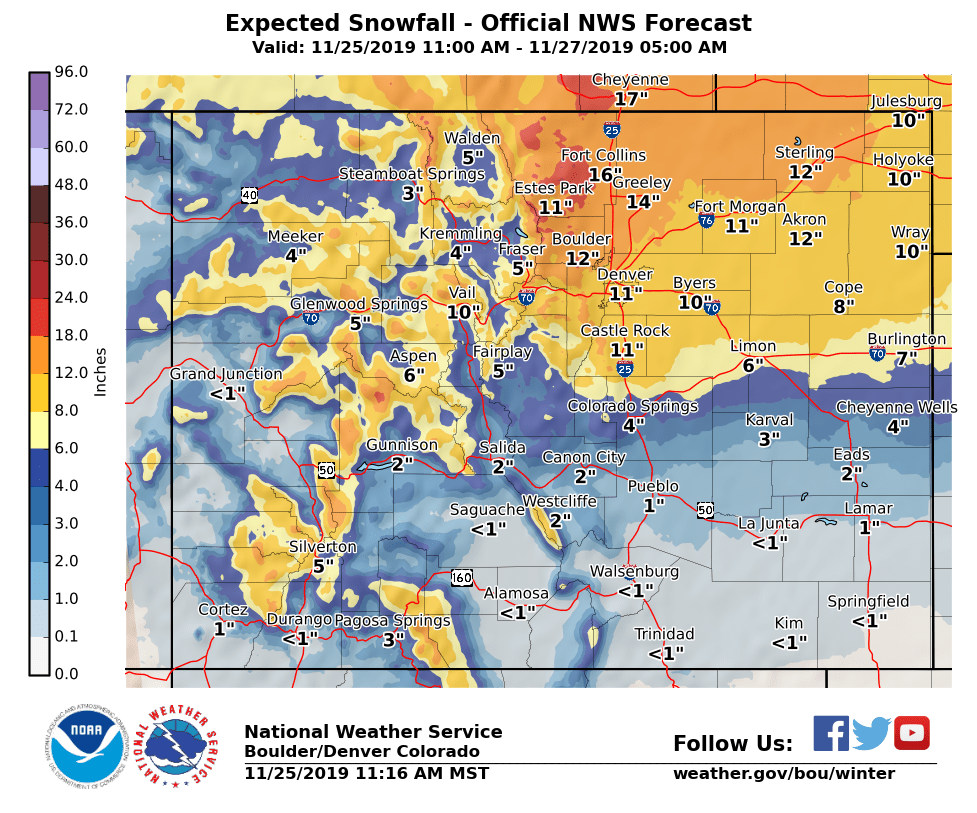 Denver7 has meteorologists, reporters and photojournalists scattered across northern Colorado covering the incoming snowstorm and will have live coverage on the storm on-air, online and on streaming devices through the day Tuesday.