Fire officials said Thursday morning that they believe the 416 Fire burning in La Plata County in southwest Colorado will reach homes in the Hermosa area within 12-36 hours, and more evacuation and pre-evacuation orders were issued.

DENVER – Fire officials said Thursday morning that they believe the 416 Fire burning in La Plata County in southwest Colorado will reach homes in the Hermosa area within 12-36 hours, and more evacuation and pre-evacuation orders were issued.

The fire grew by almost 1,000 acres Wednesday, primarily on its northern and southern flanks, officials said. Wind and dry conditions also produced at least one spot fire outside the fire line.

The fire sat at 5,103 acres with 10 percent containment when a mapping of the fire was completed at 2 a.m. Thursday. There were 617 firefighters assigned to the fire as of Wednesday as a Type I team was ordered in.

The Rocky Mountain Incident Management Type I Team will take over the fire effective Saturday at 6 a.m.

The fire had reached the Hermosa Campground by Thursday morning, and fire managers say they believe it will reach homes in the area within the next 12-36 hours.

That belief prompted a new mandatory evacuation order for the area that went into effect at 6 a.m. Thursday. U.S. Highway 550 is also closed until further notice due to the fire, officials said. But La Plata County said the highway would reopen from noon to 6 p.m. for through traffic escorted by law enforcement. That reopening is subject to the fire's behavior.

With the threat to homes in the Hermosa area, fire officials said crews have been working on protecting those homes and plan to use defensive tactics involving sprinkler system, hoses, hand crews, engines, backburns and air support, they said Thursday.

Crews are also building fire lines on the northern edge of the fire, where growth continues.

Around 9 a.m., a new pre-evacuation notice was sent out for 751 homes in the Mead/Cometti Albrecht Lane area.

La Plata County spokesperson Megan Graham said Thursday morning there are an estimated 1,200 residents that had been evacuated, up from 800 Monday, and that Thursday's pre-evacuation order affects an additional 1,000 people.

The fire started June 1 and is located 10 miles north of Durango. To sign up for CodeRED emergency alerts, click here.

Denver7 has a crew en route to the fire Thursday and will have live updates by 10 p.m.

Visit the La Plata County Facebook page or call 970-385-8700 for the latest information on road closures and evacuations. 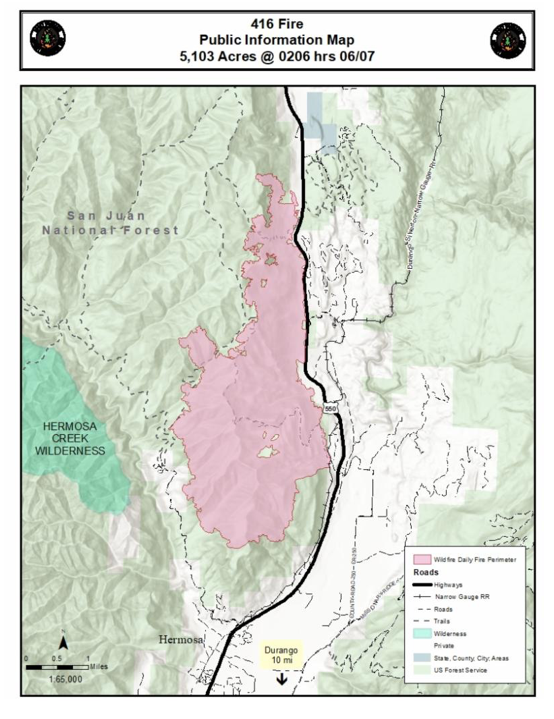