The 416 Fire burning north of Durango has grown to 7,180 acres in size and remains 10 percent contained as of Friday morning, with low relative humidity expected in the area through the day.

LA PLATA COUNTY, Colo. – The 416 Fire burning north of Durango has grown to 7,180 acres in size and remains 10 percent contained as of Friday morning, with low relative humidity expected in the area through the day.

Though the fire grew more than 2,000 acres Thursday, Colorado fire officials say that burnout operations that took place on the southern flank of the fire were successful and that no structures have been lost despite warning Thursday that the fire could reach homes within 12-36 hours. Officials say the burnouts contributed to the acreage growth of the fire.

But the fire's incident commander told Denver7's Liz Gelardi that though no structures have burned, flames have come within feet of homes in some cases and added that the conditions in the area are ripe for a large fire. He said Sunday could be the worst day of fire growth since it started.

BREAKING: Just talked to incident commander on #416fire. No structures lost but he says fire has come within feet of homes in some places. He also says conditions are just as dry as the devastating Missionary Ridge fire in 2002. pic.twitter.com/MUjR1p0i9P

A few more photos from the #416fire this morning. Smoke settled into the area overnight and visibility is poor. Last night we saw flames and huge plumes of smoke. pic.twitter.com/BftLi4pufM

Crews expect to continue aerial operations on the fire’s north side to create a burnout area in case the fire spreads in that direction. Hand crews also established a fire line on the fire’s west side after it crossed the Hermosa Creek Trail in the past 24 hours.

There was a new mandatory evacuation order issued Friday for 304 homes from Electra Lake Drive to Hermosa Cliffs Road and the north end of Two Dogs Trail, according to La Plata County. U.S. Highway 550 is closed for the remainder of the day and is scheduled to reopen Saturday at 8 a.m.

And here's a look inside the attack for the #416fire. pic.twitter.com/ir8UKlwmPb

The Rocky Mountain Incident Management Type 1 Team is expected to take over command of the fire Saturday at 6 a.m. There were 674 firefighters assigned to the wildfire as of Thursday evening.

Forecasters expected calmer winds in the area than has been seen in recent days, but with low relative humidity and temperatures expected to near the low 80s, officials said that fire weather potential Friday was high.

A man told the Durango Herald that he believes he saw the fire’s start last Friday morning close to the train tracks used by the Durango & Silverton Narrow Gauge Train uses, though an official cause has yet to be determined. The Herald also reported Thursday that the railroad had furloughed 150 seasonal employees and is considering canceling thousands of trips this month because of the fire, which could lead to a $33 million blow to the area economy.

The fire started June 1 and is located 10 miles north of Durango. To sign up for CodeRED emergency alerts, click here.

Denver7 has a crew at the fire and will have live updates throughout the day Friday.

We just got back from our tour inside the #416fire evacuation zone. Firefighters are working incredibly hard to protect homes and contain this fire. pic.twitter.com/m03L0X3AGJ

Visit the La Plata County Facebook page or call 970-385-8700 for the latest information on road closures and evacuations.

View the most recent map of the fire embedded below. 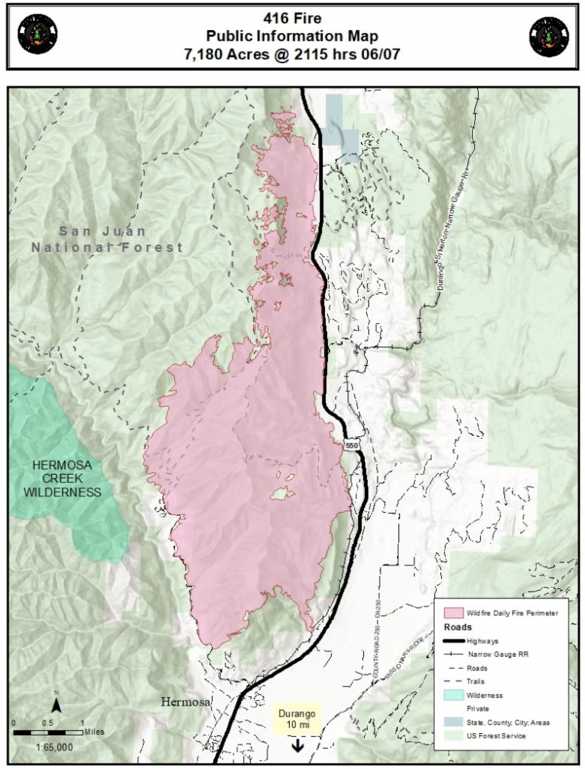