Father and son who tried to help baby bison said it had already been abandoned7:30 a.m. 6.3.16

The father and son who ignited a fierce debate after their attempt to help a baby bison at Yellowstone National Park ended with the creature being rejected by its mother and, subsequently, euthanized told ABC News that the animal was an abandoned newborn and they "didn’t have the heart" to leave it to suffer.

In their first interview since the May 9 incident, Shamash Kassam and his son, Shakeel, described coming across the bison calf. They said the creature still had its umbilical cord attached and approached them. Convinced that it would die without help, they decided to put it in the back of their SUV.

"We didn't have the heart to kind of, just leave it there and let it suffer, you know, as the darkness descended," Shakeel said in an exclusive interview with Linsey Davis that aired today on "Good Morning America."

They meant to help, and when someone asked to take a picture of the bison in their vehicle as they were awaiting a ranger's arrival, they agreed.

The photo was widely shared. When people learned the calf had been rejected by its herd and euthanized, a fierce debate raged over how to properly interact with wildlife. 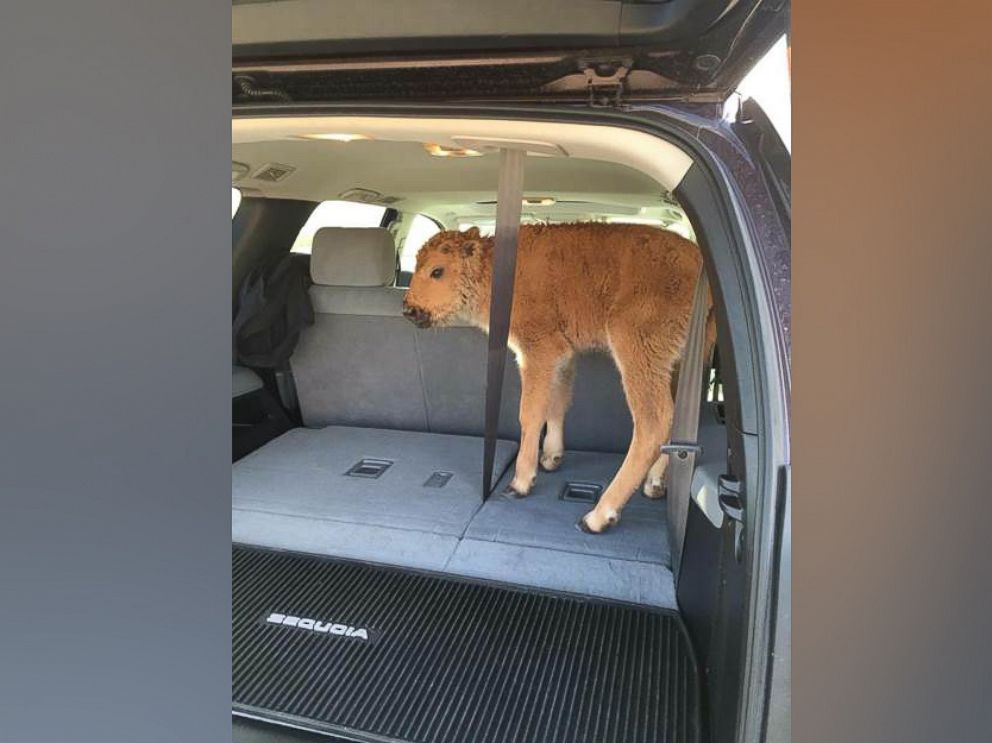 Explaining how the incident unfolded, the Kassams said the bison calf had been in the back of their vehicle for about 20 minutes when the ranger arrived.

"And then the ranger basically, you know, gave us a good scolding and said, 'You're not supposed to touch wildlife,’" Shakeel said.

The Kassams said they understood the rules but told the ranger that they couldn’t call to notify authorities because their phone had no service. They followed the ranger to try and return the calf to where they had first encountered it, but the animal resisted.

"I did my best. I lifted it up. It started kicking. Put it down. I tried to push it. And it did not want to go," Shakeel said.

Finally, they took the bison toward the herd and left it there.

"And then the ranger told us, 'You go away because he wants to follow you.' So once we went away, he was able to join with the other herd ... So that was the end of it," Shamash, of Quebec, said.

"You know, the baby was going to be fine, and everything was cool," Shakeel added. "Then when we got back home, then the story broke ... I was shocked."

Shamash was cited for disturbing wildlife. He pleaded guilty Thursday to a wildlife violation and was ordered to pay a $230 fine plus a $500 contribution to the Yellowstone Park Foundation.

The National Park Service said moving the calf was "a dangerous activity" because adult animals are very protective of their young and act aggressively to defend them. It said interference could also cause the mother to reject her offspring.

Rangers tried to reunite the calf with its mother, according to the park service, but it was ostracized by its herd. Because the calf was found wandering among visitors' cars, making it a danger to itself and others, the park service decided to euthanize it.

"It was abandoned and causing a dangerous situation by continually approaching people and cars along the roadway," the park service said.

According to the park service, regulations require that visitors maintain a distance of at least 25 yards from all wildlife — including bison, elk and deer — and at least 100 yards from bears and wolves.

Shamash said he was "shocked" by the media coverage and the public response.

"Because the whole story was, 'We kidnapped the bison. We stole a bison. We picked up a bison because we thought it was cold.' And those kind of stories were circulating all over the place. Nobody said it was abandoned," Shamash said.

Shamash, who described himself as a farmer from Africa, said he believed there would have been a place in the park where animals that had been abandoned could be cared for.

He said he had lived near a game reserve in his native Tanzania where poachers would often kill the mothers of young animals.

Asked how he would handle the situation if he could do it all over again, he said: "In Yellowstone Park, we would just leave it. ... It’s the way they are in Yellowstone Park. They don’t want to interfere with nature."