CLEARWATER, Fla. — The State Attorney's Office for Florida's Sixth Judicial District has reviewed the controversial 'stand your ground' case into the death of Markeis McGlockton and has decided to file a manslaughter charge.

An arrest warrant was issued on Monday morning and Pinellas County detectives arrested Michael Drejka. He is being booked into the Pinellas County Jail and bond has been set at $100,000.

McGlockton, 28, was shot and killed on July 19 by Drejka, 47, outside of a convenience store in Clearwater, Florida. The shooting stemmed from a dispute over a handicap parking spot between Drejka and McGlockton's girlfriend.

Pinellas County Sheriff Bob Gualtieri said, "I support the State Attorney's decision and will have no further comment as the case continues to work its way through the criminal justice system." 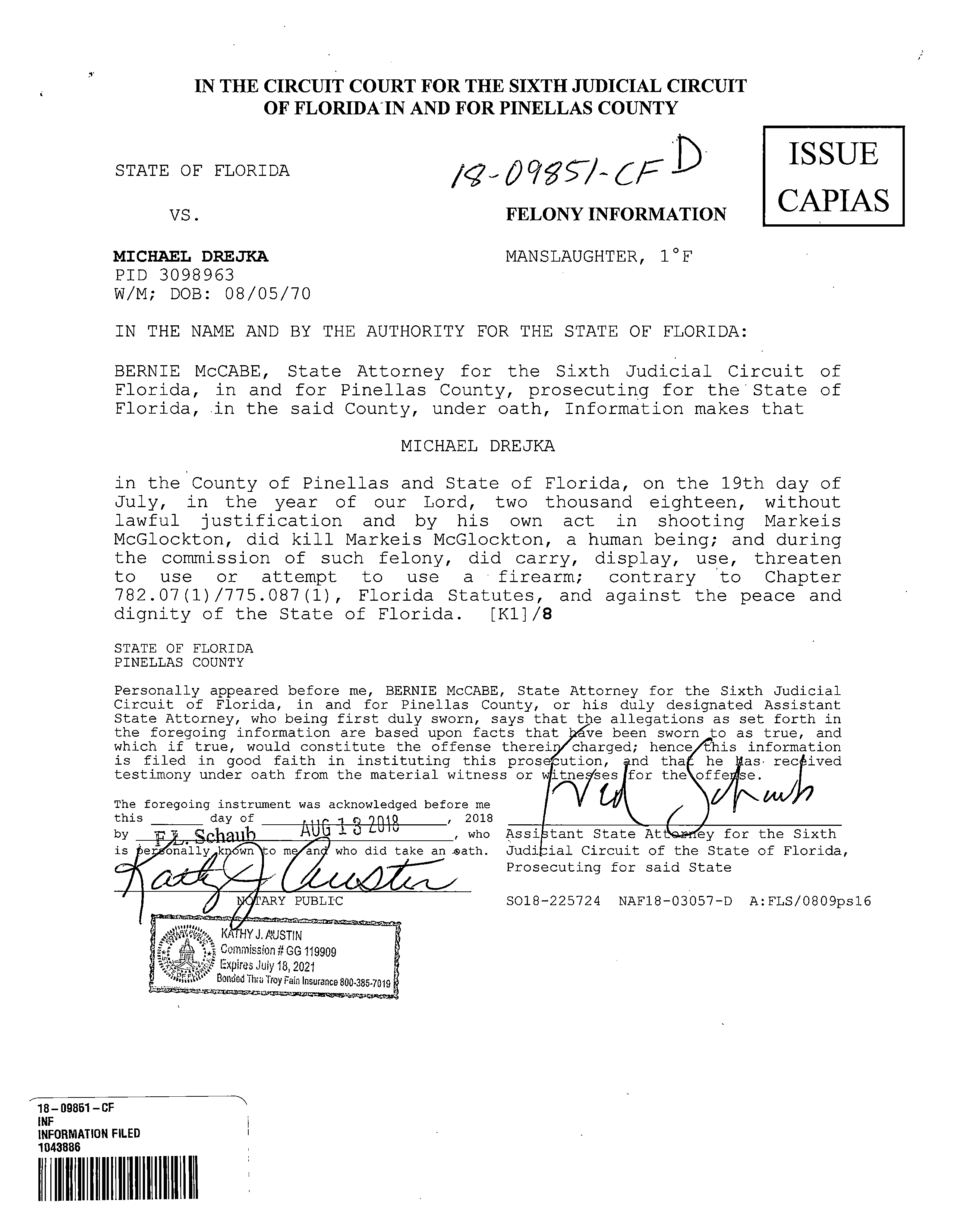 Drejka has a concealed carry license.

Statement from Attorney Ben Crump in response to Michael Drejka being charged with manslaughter:

“My first thought on hearing this news was: It’s about time. I firmly stand behind the decision by the State Attorney's Office to charge Michael Drejka with manslaughter for killing Markeis McGlockton. This self-appointed wannabe cop attempted to hide behind ‘Stand Your Ground’ to defend his indefensible actions, but the truth has finally cut through the noise. I have full faith that this truth will prevail to punish this cold-blooded killer who angrily created the altercation that led to Markeis’ needless death. We will continue to fight until justice is brought for the family of Markeis McGlockton.”

“On behalf of the family of Markeis McGlockton, I commend the office of State Attorney Bernie McCabe for charging Michael Drejka with manslaughter for his cold-blooded actions. This is a big step forward in the direction of justice, not only for Markeis’ family but also for society as a whole.”

Statement from the family of Markeis McGlockton:

“The announcement that Michael Drejka will be charged with manslaughter provides our family with a small measure of comfort in our time of profound mourning. While this decision cannot bring back our partner, our son, our father, we take solace in knowing our voices are being heard as we work for justice. This man killed Markeis in cold blood, without a second thought about the devastating impact his actions would have on our family, but this charge gives us a measure of hope that the truth will win and justice will prevail in the end.”

This is a developing story.