An man said he feels discriminated against for being gay after he was denied service at an Avon floral shop.

AVON, Ind. — A man claims the owner of a floral shop in Avon, Indiana decided not to help with his wedding when she learned was going to be marrying another man.

David Elliott says he went to Avon Florist on Rockville Road on July 19 and he posted about what happened at the shop afterward on his Facebook page.

Elliott says he discussed his wedding needs with the shop's owner, but he claims the conversation changed after he told the owner that the marriage was between two men.

"She said, 'What does your bride need?'"
"I said, 'Well, there is no bride.'"
"Then she said, 'Well, then I'm going on vacation and I can't help you.'"
"I took that to mean because of my relationship, she couldn't help me out"

WRTV went to the floral shop Saturday to get the owner's side of the story, but the shop had closed earlier than posted business hours.

We also called the shop and left a message. A man who identified himself as Greg Harris called back and said he had no comment to make about the alleged incident.

Elliott says he isn't angry about the ordeal, but he does feel like businesses should be able to fulfill requests like his without their personal beliefs getting in the way. 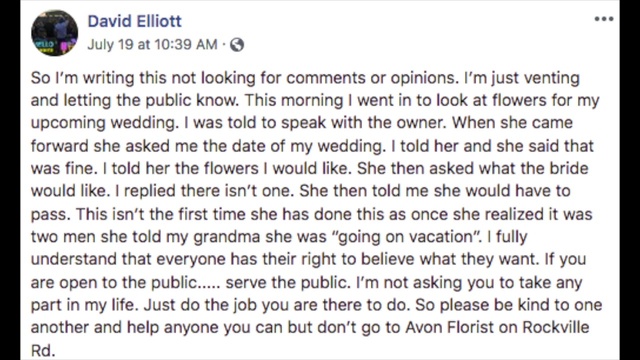 Several small businesses in Indiana have made national headlines over the past three years for their refusal to serve members of the LGBT community, including bakeries and pizzerias.

The law, which is meant to act as a safeguard to protect businesses from being forced to provide services they find objectionable based on religious beliefs, does clarify that it cannot be used to discriminate against the LGBT community.