Poll: 72% of fans say they won't feel safe at a sporting event until a COVID-19 vaccine is ready

AP1993
Anonymous/AP
FILE- This April 5, 1993, file photo, shows an aerial view of Joe Robbie Stadium during the Florida Marlins home opener, in Miami, Fla. Known originally as Joe Robbie Stadium and built mainly for the NFL's Miami Dolphins, it was designed so minimal renovations would be needed for a conversion to baseball. The Marlins started in 1993, but the mammoth stadium proved to be a poor fit for baseball. The Marlins pressed for years to get a new park until a retractable-roof stadium opened in 2012. (AP Photo/File)
By: Alex Hider
Posted at 12:42 PM, Apr 16, 2020

While pro sports leagues try and figure out a way to resume play while keeping players and officials safe amid the coronavirus pandemic, a significant number fans believe that sports shouldn't return for the remainder of the year.

According to a poll from Seton Hall University, 40 percent of respondents believe that professional sports should not be played for the remainder of 2020.

Should professional leagues decide to continue play, most fans believe that games should be held with no fans in attendance (21 percent of respondents) or restricted fan attendance (23 percent).

In fact, 72 percent of those surveyed said they would not feel safe watching a sporting event in person until a coronavirus vaccine has been developed. Health experts believe that in a best-case scenario, a vaccine would be available in the fall of 201.

The findings come as MLB has floated the possibility of all 30 MLB teams playing home games in Arizona or at Spring Training sites to limit travel. The league has yet to sign off on that plan, but reports indicated that under the proposal, the league would begin to play by June. 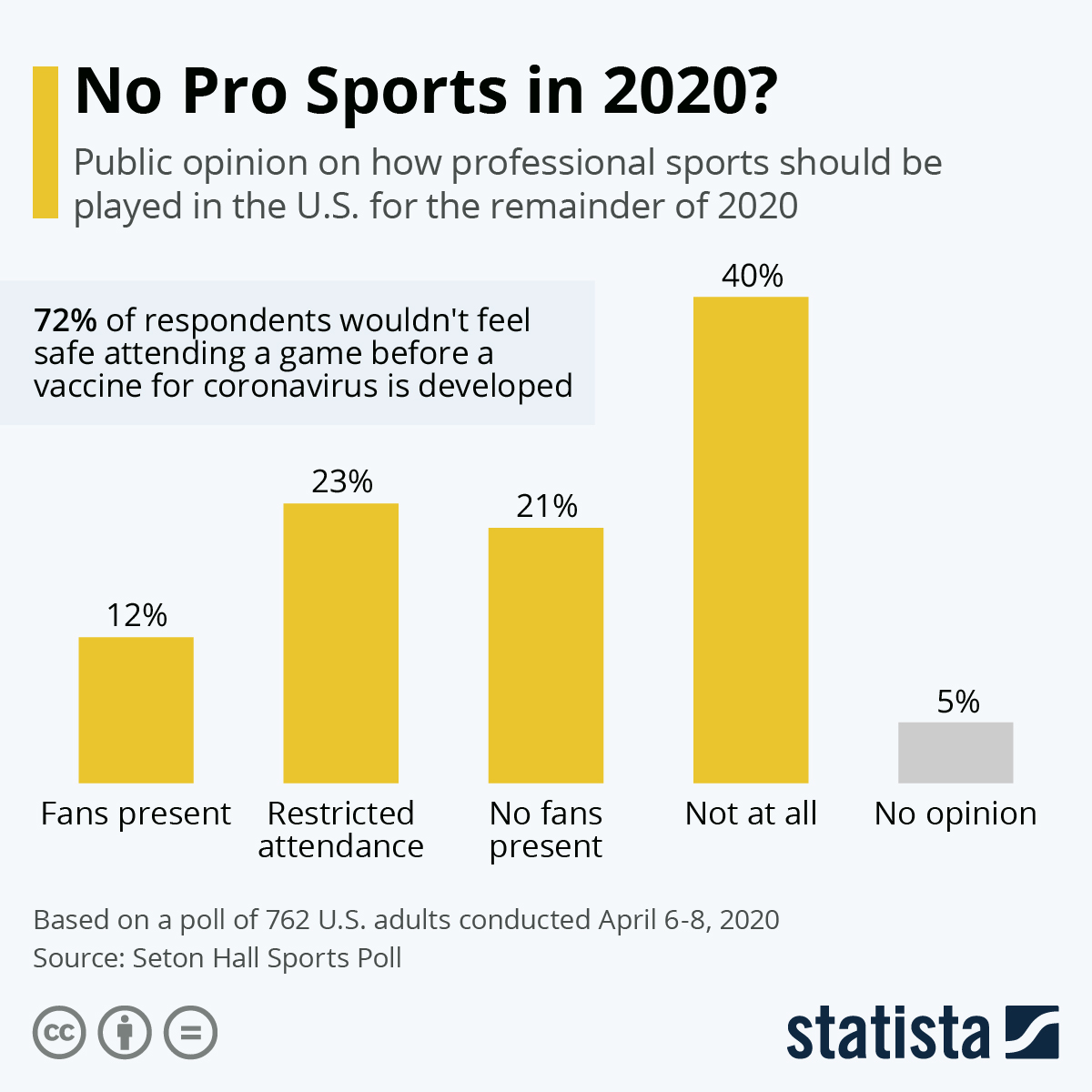 You will find more infographics at Statista

The NBA and NHL continue to play the waiting game before getting clearance to finish their seasons.

The NFL is not slated to open its 2020 season until September, but has moved ahead with its offseason plans as scheduled — though it has placed travel and visiting restrictions for players, prospects and league officials. The league still plans to release its 2020 schedule on May 9.

Copyright 2023 Scripps Media, Inc. All rights reserved. This material may not be published, broadcast, rewritten, or redistributed.