Inside the data driving Colorado's response to COVID-19

DENVER — State officials over the weekend released the most comprehensive look yet at the data driving Colorado's response to the coronavirus.

More than 900,000 Coloradans could have been infected by the coronavirus by early May if no social distancing measures were taken, according to data released Sunday by the state's COVID-19 Modeling Group, a team of researchers that the Colorado School of Public Health (ColoradoSPH) assembled to assist the Colorado Department of Public Health and Environment (CDPHE) in understanding the pandemic in Colorado.

The number of coronavirus deaths could have reached 33,237 by June 1, with no social distancing, according to the data, a number presented by Gov. Jared Polis in an initial analysis of the numbers on March 27.

An increase in social distancing by 80% dropped the number of cases in the modeling to 6,523 with a peak of Aug. 23.

Polis referenced the data at his March 27 news conference, including the projection that as many 33,237 people could have died from the virus in Colorado had no social distancing been taken and the positive impact social distancing can have on stopping the spread.

Polis said the stay-at-home order issued two weeks ago, on top of other measures already in place, would ideally get Colorado to social distancing levels of around 70%-80%.

State public health officials at a news conference Monday responded to multiple questions about modeling from the Institute for Health Metrics and Evaluation that showed Monday that Colorado may have already reached its peak, and Ryan flatly denied that the officials believe that is the case.

Herlihy said the IMHE model and others were being considered in the state but that CDPHE and School of Public Health officials were using “data most-relevant to Colorado” for their modeling.

She said some of the IMHE’s modeling data include “assumptions” from the outbreak in Wuhan, China, that they don’t believe they are seeing on the ground in Colorado. Among those differences between the response there and here, Herlihy said there were big differences in the way the two places are conducting their physical distancing.

Officials showed a graph depicting a slight flattening of the curve under the 45% social distancing rate that started March 17, and then slides about what varying social distancing levels could do to spread out the peak of the virus in the state.

“We are social distancing to save lives. If we wear masks and follow recommendations, we can save lives,” Ryan said. “Now is not the time to back off.”

The worst-case projections centered on the spread of the virus having an infectiousness rate of R0-4, meaning one person could spread the virus to four people.

State researchers have said the infectiousness of the virus in Colorado at the beginning of the outbreak was somewhere between R0-3 and R0-4.

Here's the full data set released by the state on Sunday: 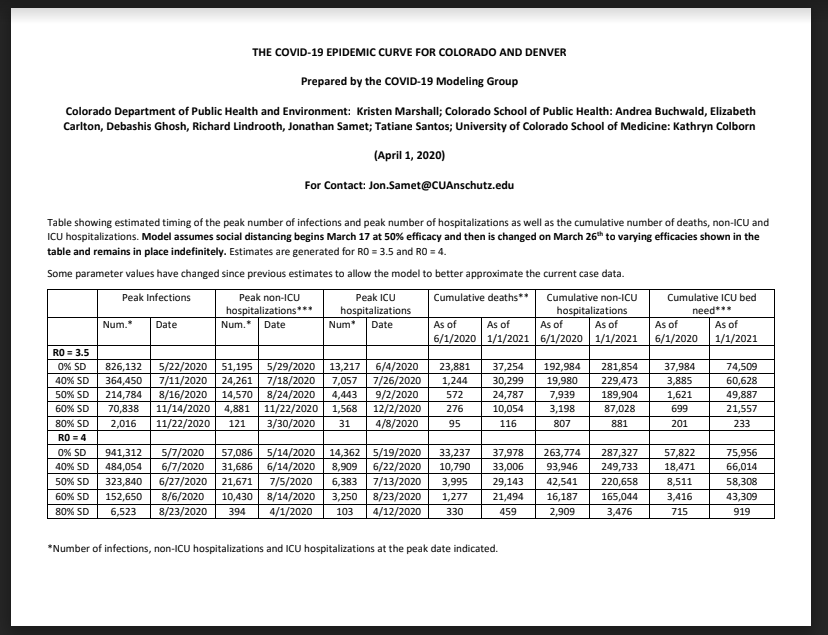 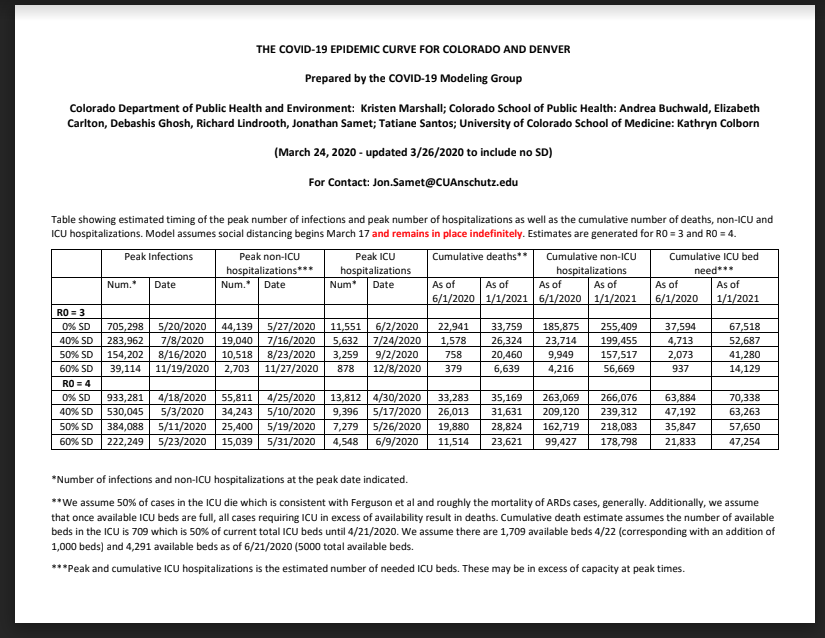