PITKIN COUNTY, Colo. -- During car rides with Ted Bundy, former Pitkin County Sheriff Bob Braudis tried to listen more than he talked. Braudis was a deputy at the time and only on the job for a few months when the now-infamous serial killer was facing murder charges in Colorado.

"I spent way more time with Theodore Bundy than I ever thought I would," said Braudis, who is now retired and living in Aspen.

Bundy made his way to Colorado in the late 1970s, picking some of the state's most beautiful places to commit the most heinous crimes. Three women disappeared and were likely killed in Colorado during a four-month span. The cases were ultimately linked back to him.

"The lead investigator from the district attorney put together enough evidence that showed Bundy was here where Caryn Campbell disappeared. We found receipts for gasoline he bought on a credit card here," said Braudis.

A rookie's threat to Bundy

Braudis is a self-proclaimed ski bum who applied for a job as a Pitkin County sheriff's deputy after a snow-free stretch left him looking for work. When he started at the department in 1977, he was in his early 30s and rotating through jail duty as part of his assignment.

"We rotated through jail duty and my boss asked me to take Theodore Bundy up to the court for a hearing early upon his arrival here from Utah. And I knew he was an escape risk; I read his psychological reports," said Braudis.

The rookie deputy says he channeled his Boston roots as he led Bundy to the court. According to him, the judge at the time did not allow firearms in his courtroom.

"I held him by the bicep climbing three flights of stairs and then I took him aside and I said, 'Theodore, the judge doesn’t allow side arms in his courtroom ... if you get more than three feet away from me I’m going to rip your head off.' And I think I got his attention," said Braudis.

Over the couple of months, he would continue escorting Bundy to and from the Pitkin County Courthouse and eventually to and from the Garfield County Jail, where Bundy was held after his first escape. Braudis recalls a bizarre request during one of their times together and wonders if the man he was tasked with watching was planning to escape all along.

"He wanted me to go to the library and get him a copy of Harry Houdini’s biography. He wanted me to get him topographic maps of this area. I said, 'You know, I’m a First Amendment freak. You have the right to the press but no way am I going to give you Houdini’s life story to take to your cell and maps on how to get out of here.' And I think he giggled. He tried and I said, 'No way,'" said Braudis.

He said Bundy's criminal allegations never came up during the course of their conversations despite some prodding from the young deputy.

"I mentioned: 'It sounds like you are famous for putting a fake sling on your arm and asking some girl to help you load your kayak or your surf board or your water skis on your car and they’re never seen again. And the lady Caryn Campbell was here with her fiancé, staying at a hotel. She took the elevator up to the second floor from the dining area, was never seen again,'" said Braudis.

The manhunt and a run on guns

Bundy jumped out of a second-story window at the Pitkin County Courthouse in June 1977. He was representing himself in court and was allowed to visit the law library in the back of the courtroom. Braudis wasn't on the clock at the time but he remembers getting a phone call after working a graveyard shift the night before.

"My phone rang. It was the office. They said, 'Bob, get your gun, get into the office,'" said Braudis. "So that led us into road blocks all over the county. I was put in a helicopter with a high-powered rifle."

The department sent Braudis door-to-door with a poster of Bundy to see if anyone had spotted him and to make sure Bundy wasn't holding any hostages. Braudis describes a wave of panic throughout the community.

"The police chief – a day or two after Bundy’s escape – suspended transactions and handguns. There were dozens of women lined up at the gun store to go in and buy a pistol," said Braudis.

Less than a week later, Bundy was driving a stolen car on Highway 82 when he was taken into custody again. A banner at the sheriff's office celebrated his recapture. It said: "Welcome Home Teddy."

“For us that’s really the last piece of the investigation. We would like to recover her remains and give the family closure and a proper burial," said Commander Ryan Kenney, with the Vail Police Department.

Another Colorado victim, Caryn Campbell, disappeared nearly two months prior. She was vacationing with her boyfriend at the Snowmass Wildwood Inn when she left decided to grab a magazine from her room. Her naked body was later discovered in a snowbank just outside the resort. She had suffered blows to the head and had deep cuts on her body.

The third victim went missing on April 6, 1975 in Grand Junction. Denise Oliverson was riding a bike to her parents' house but she never made it. Her bike and sandals were discovered but her body has never been found.

"He truly is a coward that preyed on people and I would rather celebrate the victims for the lives they led rather than celebrate him for the lives he took," said Commander Kenney.

Former freelance photographer Ross Dolan knows evil is real; he captured pictures of Bundy during his court proceedings in Colorado.

"One of the other things, too, that people didn’t realize back then was that this as a whole, it was kind of a carnival atmosphere. It was kind of a circus that went around that surrounded this whole thing. People didn’t take him seriously because he was so charming," said Dolan.

His assignments included taking photos after Bundy was re-captured in Aspen. The images were a window into a serial killer's personality. A disturbing picture showed the alleged killer with a smirk on his face.

"When he came down we started firing away, and basically, he just turned my way and I happened to get that particular shot that survived. A lot of people were there taking the same pictures, I’m sure, so there was nothing really extraordinary about the job," said Dolan.

He didn't know the magnitude of the story he was covering until investigators started working across state lines. The man in his photos would later be tied to the murders of 30 women.

Over the years, Bundy has kept coming up in Dolan's life. He later realized his first encounter was much earlier than when he took the photos.

"I was picking this guy up to run to the airport early in the morning and he leaned forward and he asked if I had seen this woman. And I asked who she was and he said, 'She’s my fiancée,'" said Dolan.

It was chilling to think about, Dolan said. He was working as a cab driver in 1975 and realized he drove Campbell's fiancé to the airport. When Dolan left the Roaring Fork Valley he wanted to leave his memories of Bundy behind too.

The paper at which he worked has changed names and buildings since then, and as time went by the photos were forgotten. But in 2017 a locksmith saw a safe at the Glenwood Springs Post Independent and offered to crack it.

"We had no idea what was in there. It was this big discovery," said John Stroud, the paper's current editor. "There was this old envelope with some negatives, some black and white negatives and contact sheets, and among those were the photos of Ted Bundy in Pitkin County before and after his escape there, and it was just this little slice of history that we happened onto."

The name on the envelope said Ross Dolan. After all those years, his original negatives had been preserved in the safe.

"It’s that iconic grin that he would flash in the courtroom and you can just see the charm that everyone talks about with him – evil charm I guess," said Stroud.

What if Bundy's story ended in Colorado?

Bundy escaped from the Garfield County Jail in December 1977. He would go on to kill Margaret Bowman and Lisa Levy at a Florida State University sorority house.

Florida decided Bundy's fate when he was strapped into an electric chair and killed 30 years ago. In Colorado, there's always been speculation about how the story would've been different if he never escaped from the jail.

"Had he not escaped in Colorado, I think he would’ve been convicted and gotten life in prison or the death penalty here," said Braudis.

Click here or on the image below for a gallery of newspaper clippings about Ted Bundy's time in Colorado. 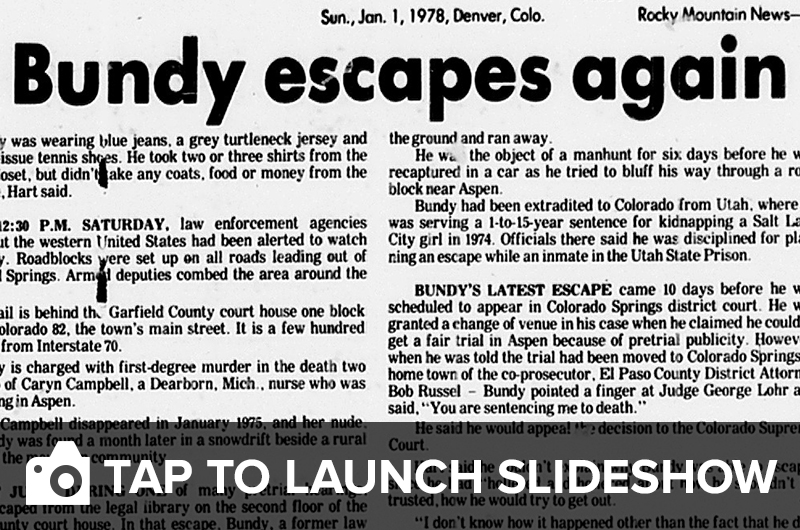