Polls in Colorado closed at 7 p.m.

DENVER – On Super Tuesday, Colorado hosted its first presidential primary in 20 years. State elections officials said they expected possible record turnout in the primary as voters decided which Democrat they wish to nominate for president, with President Trump expected to win the state’s Republican primary handily.

Polls closed in Colorado at 7 p.m. If you haven’t voted and still hope to, click here to find a list of polling centers and ballot dropboxes.

Colorado has been voting for weeks because of the state’s mail-in ballot system, and the last-minute dropouts by several Democratic candidates could come into play as the last surge of Coloradans votes Tuesday.

Denver7 will be posting live updates on this page throughout Tuesday and Wednesday as results from the 14 Super Tuesday states come in. Refresh the page for the latest.

We will also be streaming live, local Super Tuesday coverage from 4 p.m. to 10:30 p.m. on our apps on Roku, Apple TV and Amazon Fire, as well as here on our website and on our social media pages. Click here to learn how to download the app.

Head over to our Election Results page for a statewide percentage breakdown, congressional district breakdowns and county-by-county results on both the Democratic and Republican sides.

Results are still being counted for California and Maine. The Associated Press projected around 9 p.m. Tuesday that Bernie Sanders would grab California. As of 5:15 a.m., Sanders was still leading in California (33%), following by Biden (24%) and Bloomberg (15%). That's with 51% of the votes tabulated. For the primaries in Maine, 91% of the votes have been tabulated, with a close call between Biden (34%) and Sanders (33%). Bloomberg is currently at 12%.

In the Colorado Democratic primary — and with 89% of the votes reported — Bernie Sanders had ran with 36% of the votes, Joe Biden with 23%, Bloomberg with 21% and Warren with 17%. As of now, that has earned Sanders 13 delegates.

Just kidding on being done for the night. The Associated Press just called Texas, which has the second most delegates in the country, for Joe Biden. He currently leads Bernie Sanders 33%-29% and Michael Bloomberg has 15%.

We wanted to take some time to get some more information on how the other states would break down before fully publishing our Colorado Democratic primary story, but here it is. With 63% of votes tabulated, Sanders won 36%, followed by Biden (23%), Bloomberg (21%), Elizabeth Warren (17%) and Tulsi Gabbard (1%).

We're calling it a night for now but will be back with the latest numbers starting at 5 a.m. Wednesday. An initial breakdown of delegate share could also be released by the Colorado Democratic Party.

The Colorado Secretary of State’s Office says it looks likely we’re going to see the highest overall turnout of any primary in state history. As of 10:10 p.m., 58% of the vote had been tabulated.

The Secretary of State’s Office said that overall voter turnout numbers will include the votes for the candidates who formally dropped off the Colorado ballot (Klobuchar, Buttigieg, Bennet, Delaney), though the vote totals for the Republican and Democratic primaries do not include those numbers and will be several hundred thousand votes apart. Turnout as of 10:20 p.m. was at 1.45 million.

Many Colorado counties stopped counting ballots at 10 p.m., but the larger, metro-area counties will keep counting until midnight. All counties will resume counting around 8 a.m.

As Colorado results continue to be tabulated, Joe Biden has overtaken Michael Bloomberg by a couple hundred votes. As of 9:30 p.m., with 661,015 Democratic ballots tabulated, this is the current breakdown:

The Associated Press is projecting Bernie Sanders will win California, the biggest prize on Super Tuesday, at the close of polls there. But how many delegates he will receive from the state will be the main thing to look at once results start coming in.

The Associated Press has called Massachusetts, the home state of Elizabeth Warren, for Joe Biden. He currently leads with 34% of the vote, according to ABC News.

We caught portions of speeches from the two candidates who have so far won statewide races on Super Tuesday: Joe Biden and Bernie Sanders.

ABC News projects that Joe Biden will win the Minnesota primary and Bernie Sanders will win the Utah primary.

The current breakdown is now as follows:

The Associated Press reports that Michael Bloomberg “plans to reassess on Wednesday whether he should stay in the race after disappointing results in Tuesday’s primaries,” citing a person close to the campaign.

As of right now, he has only won the American Samoa caucus. In Colorado, with 582K Democratic ballots tabulated, Bloomberg was second, with 23% of the vote.

We’re getting a better look at the Super Tuesday breakdown, which shows good results so far for Joe Biden. Here are the races that ABC News has called so far:

Here’s a look at the breakdown so far and percentage reporting in the Super Tuesday states (via ABC News):

We have a developing story up on President Trump's victory in Colorado. With 524,144 votes tabulated in the Republican primary, Trump was leading his opponents with more than 92% of the vote, according to the Secretary of State's Office.

Colorado Republican Party Chairman Ken Buck has a new statement out after President Trump was projected to win Colorado:

"President Trump has lifted our nation to new heights with a record-breaking economy, historically low unemployment, and an agenda that benefits all Americans," Buck said in a statement. "Tonight's results confirm what Coloradans already knew: We need another four years of President Trump."

Though the AP and ABC News have already called both of Colorado's races, they are far from over. Voting tabulation is still extremely early, and the big key in the primary is the delegate share, which is allocated both at the statewide level -- 23 delegates are pledged by statewide results -- and at the congressional district level, where 44 delegates will be decided. Candidates need to get 15% of the vote either statewide or in a congressional district in order to gain delegates there.

ABC News projects that Donald Trump will win the Colorado Republican primary. With a small number of votes tabulated in Colorado, Trump currently leads the primary race with 91% of the vote.

The Associated Press has called the Colorado Democratic presidential primary for Bernie Sanders. With 3% reporting, Sanders leads with 32%. Biden currently has 26.5%, followed by Michael Bloomberg at 21.25% and Elizabeth Warren at 16%.

Polls close in Colorado in five minutes and state results should start coming in shortly afterward. Here is a snapshot of how Super Tuesday states are shaping up so far in early returns (via ABC News):

With 20 minutes before polls close, the Secretary of State's Office says it is hearing from county clerks that turnout has been "strong and steady all day" and that it's possible there will be record participation for a primary. Anyone who is in line at 7 p.m. can still cast their vote, according to state rules.

The city of Lone Tree says its special election, which had been scheduled for May 5, has been canceled. Three incumbents: Mayor Jackie Millet, District 2 Councilmember Cathie Brunnic and District 1 Councilmember Wynne Shaw have been re-elected, the city said.

None of them faced any opposition in their races, hence the decision. Each will be sworn in again on May 19 to begin their four-year terms.

Both ABC News and The Associated Press have called Alabama for Joe Biden.

So far, these are the winners who have been called:

There are a handful of big names expected to be at the Joe Biden party in Denver, which will kick off here in the next little while. Among them: Mayor Michael Hancock, Senate President Leroy Garcia, former U.S. Ambassador Christopher HIll, Sen. Nancy Todd, Rep. Adrienne Benavidez, Rep. Jessie Danielson and former senator and Interior Secretary Ken Salazar. 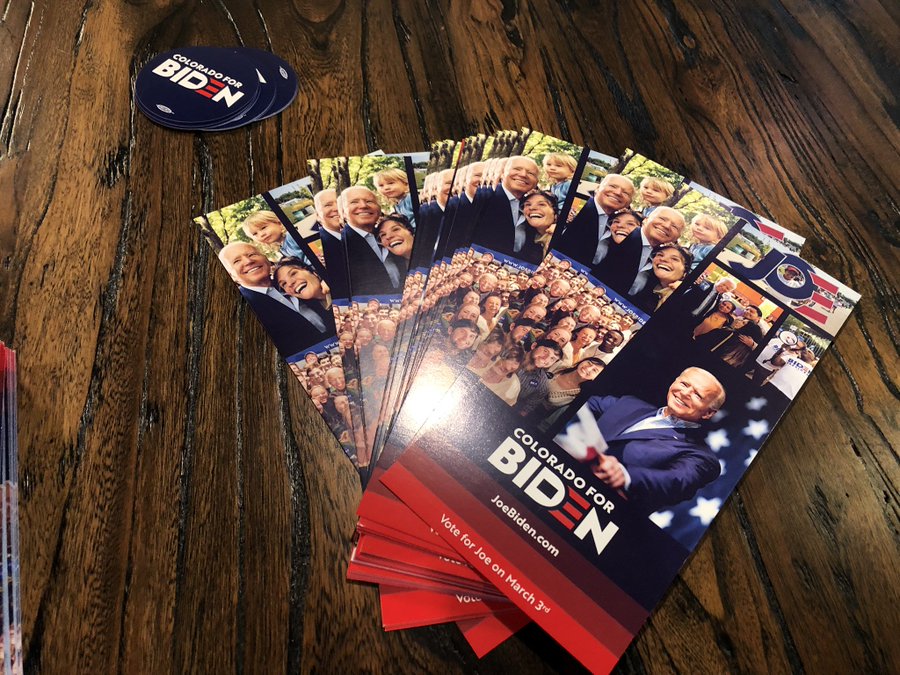 The Colorado Secretary of State’s Office sent out a new batch of ballot numbers (valid as of 3 p.m.).

Among unaffiliated voters, 253,995 Democratic ballots had been returned and 107,969 Republican ballots were returned.

ABC News projects that Bernie Sanders will win his home state of Vermont and Joe Biden will win in Virginia. The Associated Press has also called the Virginia race for Biden.

Here’s a roundup of election news from across the state so far today:

The Colorado Secretary of State’s Office released the latest ballot numbers as of 10 a.m. earlier today. A total of 1,311,477 ballots had been cast as of then. Of those ballots, 683,331 were Democratic ballots and 549,284 were Republican ballots. Counting of 78,862 ballots was still in progress.

After suspending their campaigns on Sunday and Monday, both Pete Buttigieg and Amy Klobuchar officially withdrew from Colorado’s Democratic primary by Tuesday morning. Their official filings mean that votes for both candidates will not be counted by Colorado county clerks.

Votes for candidates who have not formally withdrawn from the primary will still be counted.

The candidates who have officially withdrawn from the primary are: Klobuchar, Buttigieg, Michael Bennet and John Delaney.

In Lake County, Clerk and Recorder Patty Berger said that elections officials there realized last week they had not been sorting unaffiliated ballots into Democratic and Republican piles for tracking purposes.

Berger said the error affected 274 unaffiliated voters. The office went back to ask voters which party they voted for – not form whom they voted – to try to fix the problem. She said that as of around noon, 131 voters had gotten back to them and more people were calling.

In Denver, elections officials said through Tuesday night, 244 unaffiliated voters wrongly returned both Democratic and Republican ballots – thus nullifying their votes. The ballots cannot be counted or cured because of the state’s rules that unaffiliated voters may only return a ballot from one party. The Denver Elections Division said those 244 ballots represented 0.05% of the ballots returned in the county as of Tuesday night.

Good afternoon, Colorado! The Denver7 Digital Team will be updating this story throughout the afternoon and evening as Election Day develops and results start to come in.