DA: No charges against Aurora police officer who shot, killed homeowner who had just killed intruder

No criminal charges will be filed against an Aurora officer who shot and killed a homeowner in late July, the 17th Judicial District announced Monday.

AURORA, Colo. — No criminal charges will be filed against an Aurora officer who shot and killed a homeowner in late July, the 17th Judicial District announced Monday.

Aurora officer Drew Limbaugh, responding to a report of a home intruder in north Aurora the morning of July 30, shot and killed the homeowner, Richard “Gary” Black Jr., 73, after Black shot and killed 26-year-old Dajon Harper who broke into his home.

“Based on the evidence presented and the applicable Colorado law, there is no reasonable likelihood of success of proving any crimes beyond a reasonable doubt at trial,” District Attorney Dave Young wrote in his decision letter. “Therefore, no criminal charges will be filed against the law enforcement officer involved in this incident.”

Family and police both said Harper had broken into the family’s home early that morning and grabbed Black’s step-grandson, who was reportedly being bitten and chocked by Harper.

The 73-year-old man and his stepson, Chad Hayashi, were able to fight Harper off the boy before Black allegedly shot Harper twice in the torso during the struggle, ultimately killing him.

Hayashi said that after Black shot Harper, he turned a corner inside the home and was shot by police, whom Hayashi and the family attorney said shot from outside the home.

In the decision letter, Young said investigators collected footage from body-worn cameras and conducted witness interviews. According to the report, officer Limbaugh shot Black after the 73-year-old man failed to drop his gun when he was ordered to by responding officers.

“He noticed the man was wearing a robe and held a silver semi-automatic handgun just above his waistline. Officer Limbaugh made eye contact with the man and thought that the man looked like he ‘had just checked out and was killing people inside the house,’” the decision letter read.

Young said police did not know that Black had woken after midnight to investigate banging sounds and soon heard his 11-year-old grandson screaming as an intruder attacked him inside the bathroom. Police also did not know that Harper was lying on the bathroom floor after being shot twice by Black, he said.

"The evaluation of Officer Limbaugh's reasonable belief must be based not upon what we now know, but the circumstances as he perceived them at the time: hearing gunshots and then seeing an armed man emerge from a back room who refused commands to drop the weapon," Young wrote.

The following excerpt from the 26-page letter details what officer Limbaugh's body cam picked up the morning of the incident: 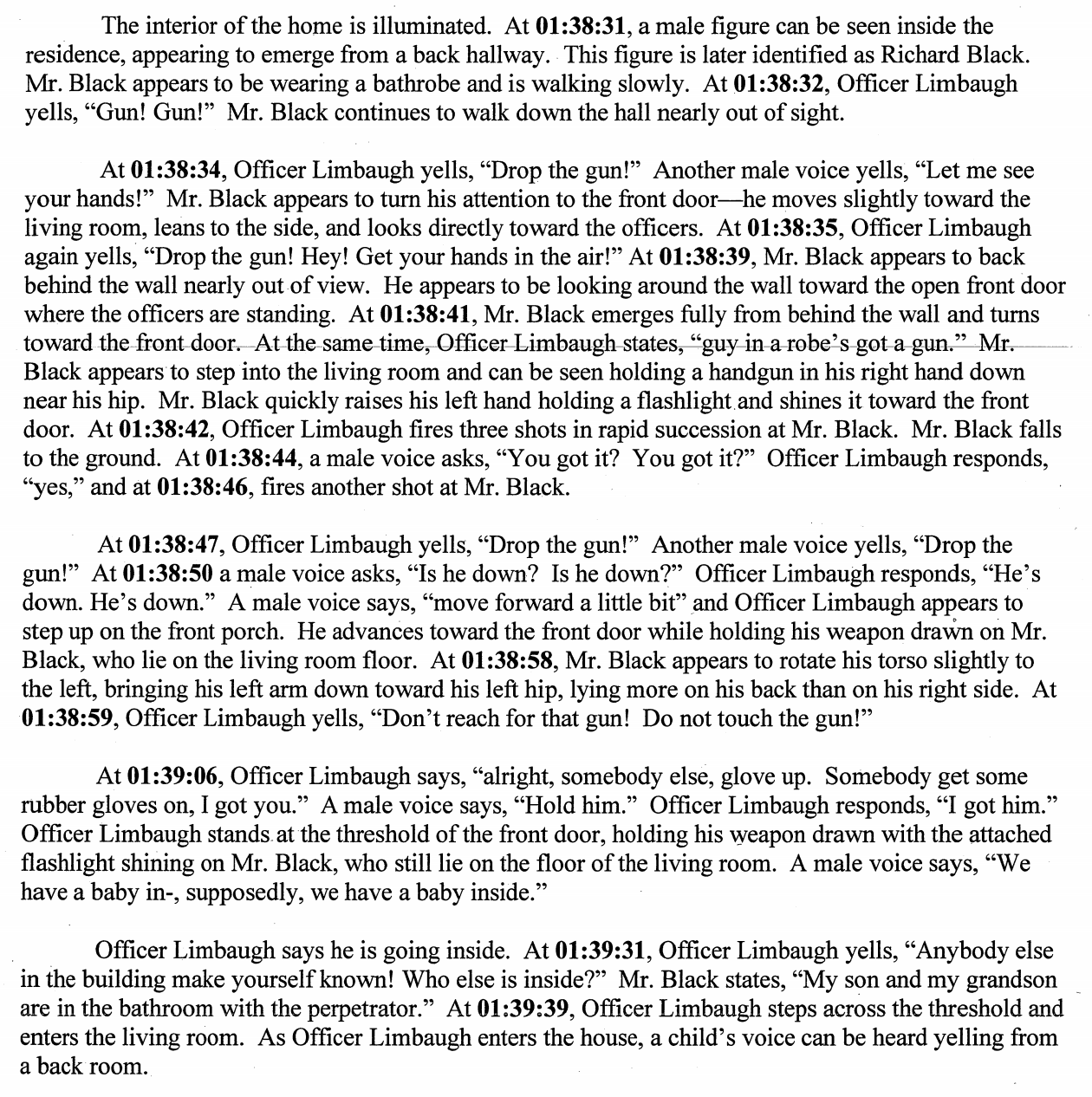 However, Qusair Mohamedbhai, an an attorney for Black's family, said the letter was not accurate.

“The letter was not an accurate representation of what happened," Mohamedbhai said. "The letter very much attempted to highlight things that were untrue and very much omitted very important facts about why this shooting was an absolute tragedy.”

Police have said Black had hearing impairment due to his military service. Young wrote that Black may not have heard the commands or recognized the officers as police but said that does not change Limbaugh's "reasonable belief that Mr. Black presented a threat."

Witnesses told police that Harper was at a party at a family member's home nearby and may have been using drugs. Early that morning, he ran away and apparently broke down the Black family's front door.

Black's grandson told police he woke up after feeling a cold breeze. He described walking toward his father's bedroom but then seeing a stranger showering as he passed the open bathroom door.

The boy said the man grabbed him, locked the bathroom door and was strangling him before his father and grandfather were able to get inside the room.

Harper, who was 26, died after being shot twice in the chest by Black. An autopsy report found levels of marijuana and methamphetamine in his blood.

The Associated Press contributed to this report.