Copyright 2020 Scripps Media, Inc. All rights reserved. This material may not be published, broadcast, rewritten, or redistributed.
Denver7
Gov. Jared Polis said Monday afternoon he would allow the statewide stay-at-home order to expire Sunday, but plans keep those strict measures discussed by health officials in place as the state gradually begins to reopen through what Polis said would be “safer at home” guidance.

DENVER – Colorado public health officials said Monday that even once the governor begins to lift the stay-at-home order next week, strict physical distancing measures, the wearing of masks and better COVID-19 case detection and containment will be needed for months to avoid overwhelming the state’s ICU hospital beds.

Gov. Jared Polis said Monday afternoon he would allow the statewide stay-at-home order to expire Sunday, but plans keep those strict measures discussed by health officials in place as the state gradually begins to reopen through what Polis said would be “safer at home” guidance.

He used data presented at an earlier briefing by the Colorado Department of Public Health and Environment that showed the stay-at-home order and other measures put in place last month have led to social distancing in Colorado by about a 75% departure from normal.

Colorado School of Public Health Dean Dr. Jon Samet and CDPHE State Epidemiologist Dr. Rachel Herlihy said that the only way to keep the state from oversaturating the number of ICU beds in the state would be to keep those social distancing levels in the 65% range in the months ahead. Samet is among those leading the state modeling team, which also released its updated model Monday afternoon.

The only feasible way to do that, the health officials said, is to combine a still-high level of social distancing among all Coloradans, even higher levels for at-risk populations, the continuation of mask-wearing, and more-robust testing, tracing and containment in the months ahead.

If those levels fall to 45% in June, the state would reach its ICU bed capacity between August and October, the officials said.

As such, Polis said, when the stay-at-home order expires after April 26, many of the same rules will still apply – just as guidance. He said it would be Coloradans’ personal responsibility to keep limiting their physical interactions in the months ahead to keep the state from being overwhelmed. Polis said the Colorado model is the "most relevant" and the "one we look at closest" of all the models.

Under the “safer at home” guidance, Polis said, people will still be advised to stay at home whenever possible and to avoid unnecessary social interactions. The most vulnerable groups will be asked to stay at home unless they absolutely need to leave their home. 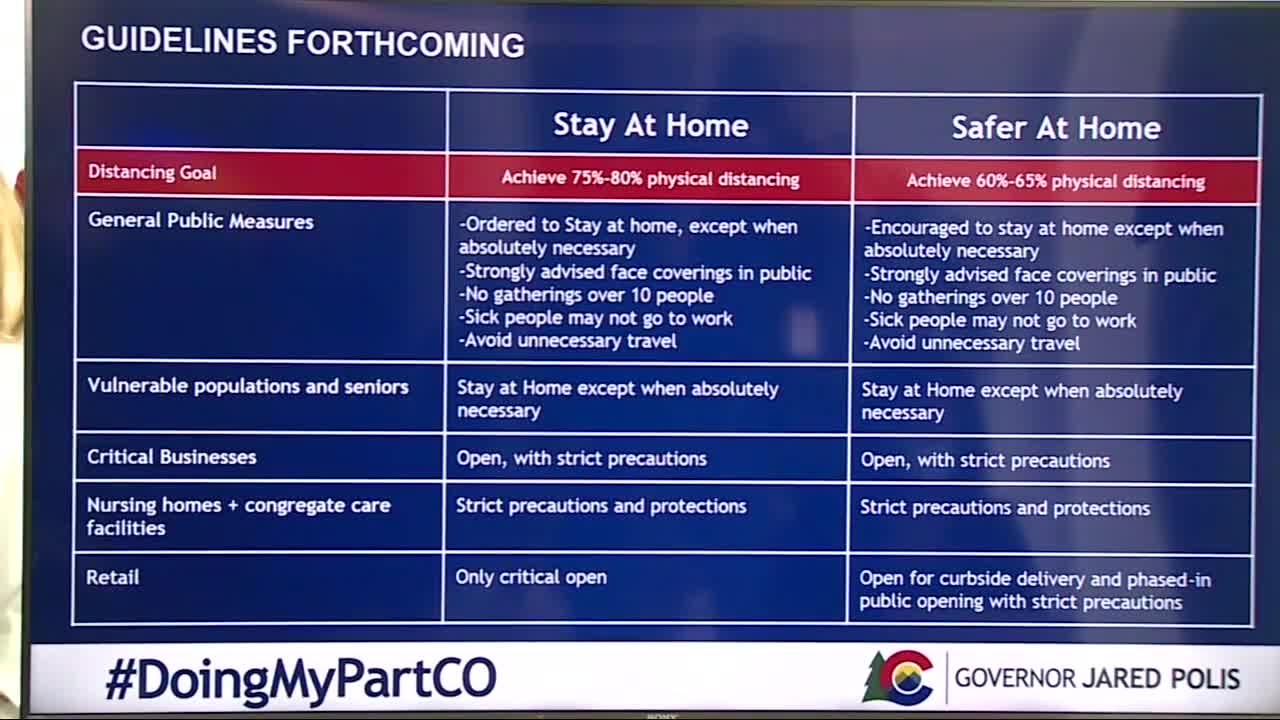 Gatherings will still be limited to fewer than 10 people and sick people will not be allowed to work.

Elective procedures and dental work will also come back with strict precautions to ensure all workers and staff have adequate PPE and that critical care needs can still be met.

Polis said he hoped to allow a gradual phase-in of reduced capacities at restaurants and bars by mid-May but said only takeout and delivery would remain open for now.

But schools will stay closed under the new guidance, according to Polis’ presentation. 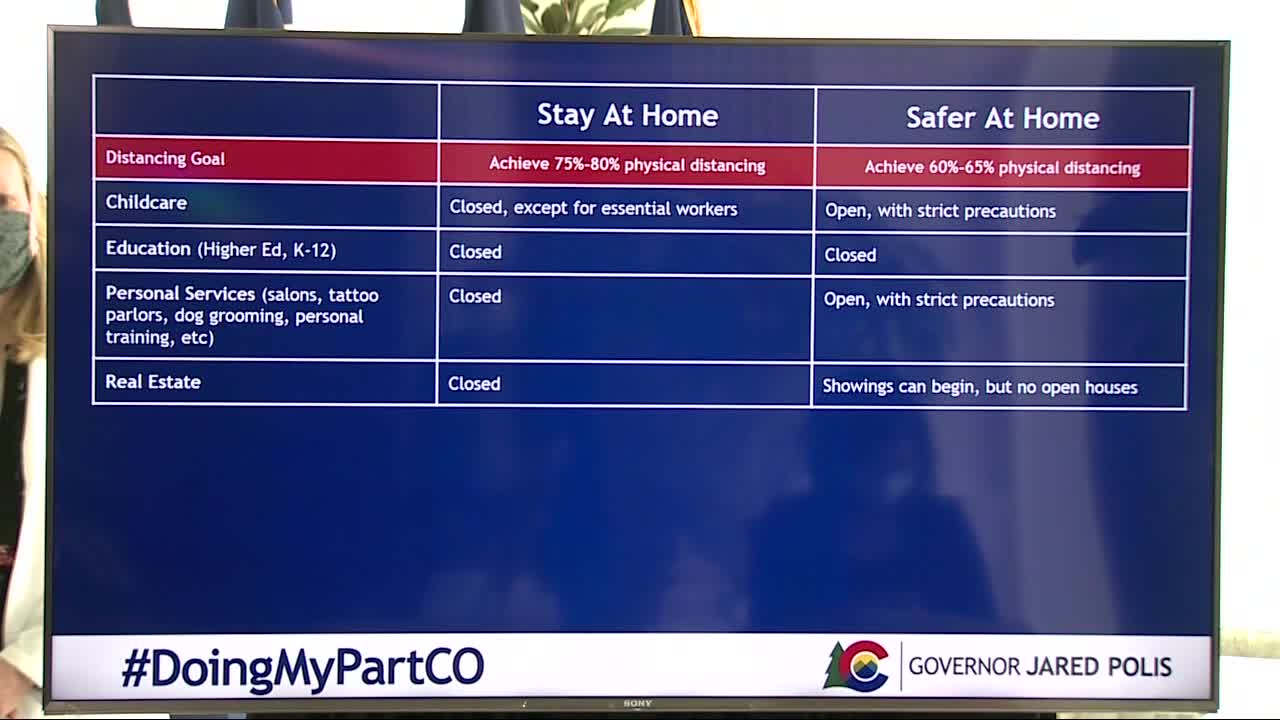 And Polis estimated that between 25% and 50% of people, or possibly more, who have the virus are asymptomatic.

Though he and the health officials all said that testing was currently lacking overall, Polis said more had come online since the start of the outbreak and that testing isn’t the most important thing right now because of the vast number of asymptomatic cases. He said that even with mass testing, perhaps the state could lower its “safer at home” social distancing guideline to a reduction of 55% instead of 65%.

He said testing would only have an epidemiological benefit when it’s coupled with intensive contact tracing and quarantining.

Herlihy said Monday that the state was hoping to significantly increase its number of epidemiologists to help in that contact tracing but there was still a way to go before it can get to the numbers it hopes for.

But he said it was important for people to go back to some semblance of sustainable living in order to get people’s lives and the economy back on track.

Polis said he believed he would allow Eagle County to lift its stay-at-home order later this week and said county health departments will play a big factor in how the state addresses COVID-19 in the months ahead until a cure or vaccine can be developed.

He said that the hope is for public health officials to better identify small outbreaks and do isolating and testing in more-targeted fashions rather than having to apply blanket orders to the entire state.

Polis said he would be issuing draft guidance on what the new guidance will look like before the stay-at-home order expires this weekend. Denver outlined a similar plan earlier Monday.

And though Polis and other officials acknowledged the excitement Coloradans could feel about hearing the order had been lifted, he cautioned that there was still a long way to go before things get back to even a semblance of what was once normal.

“As it rolls off April 27, we need to figure out how to run the marathon now that we’ve run the sprint,” Polis said. “...I hate to break it to you, but the easy part was the sprint.”