DENVER -- Radio, television and newspaper advertisements are inundating the Denver area promising an end to pain through regenerative medicine.

Stem cell clinics, often operated inside the offices of chiropractors, are marketing their services as an alternative to surgery. 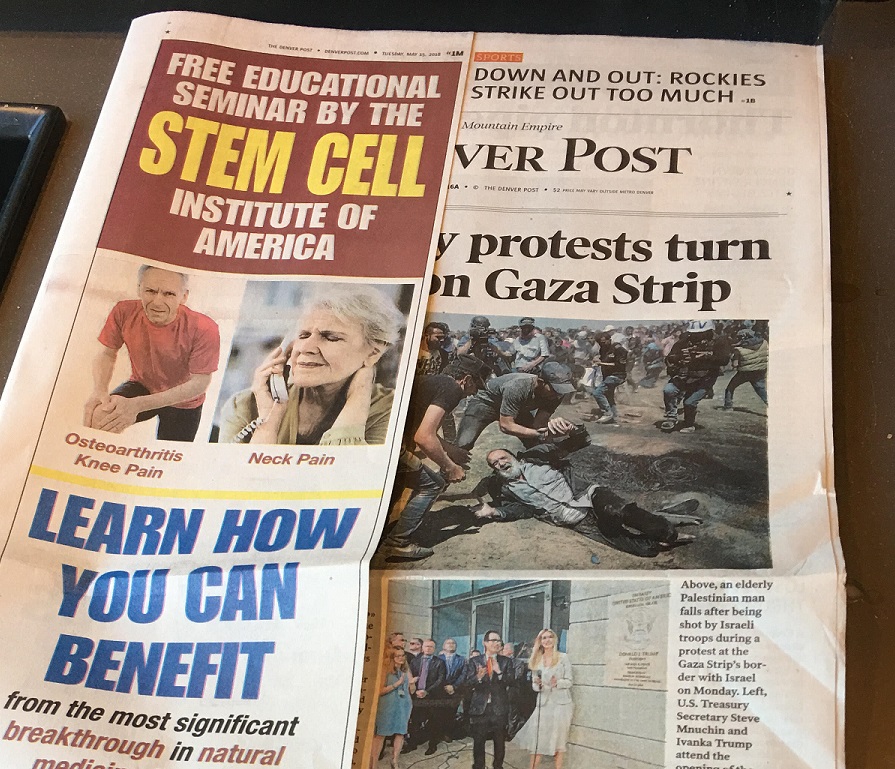 The clinics promise to inject stem cells from amniotic fluids donated by new mothers. The clinics say when those stem cells are injected into knees, hips and other pain-plagued areas, they can regenerate cartilage and resolve pain without a costly and risky surgery.

But those drawn in by marketing materials may not realize the stem cell injections are not approved by the FDA, are typically not covered by insurance and cost patients thousands of dollars out of pocket.

“What's driving stem cells, a lot of it, is the patient desire for a miracle," said Dr. Jared Foran, an orthopedic surgeon. “I see patients a lot where there’s not even a shred of evidence that a cell has grown in their knee.”

A group of local orthopedic surgeons and doctors told Contact7 Investigates the stem cell publicity blitz is bringing more and more patients into their operating rooms who have already spent thousands of dollars on injections that did not resolve their pain. 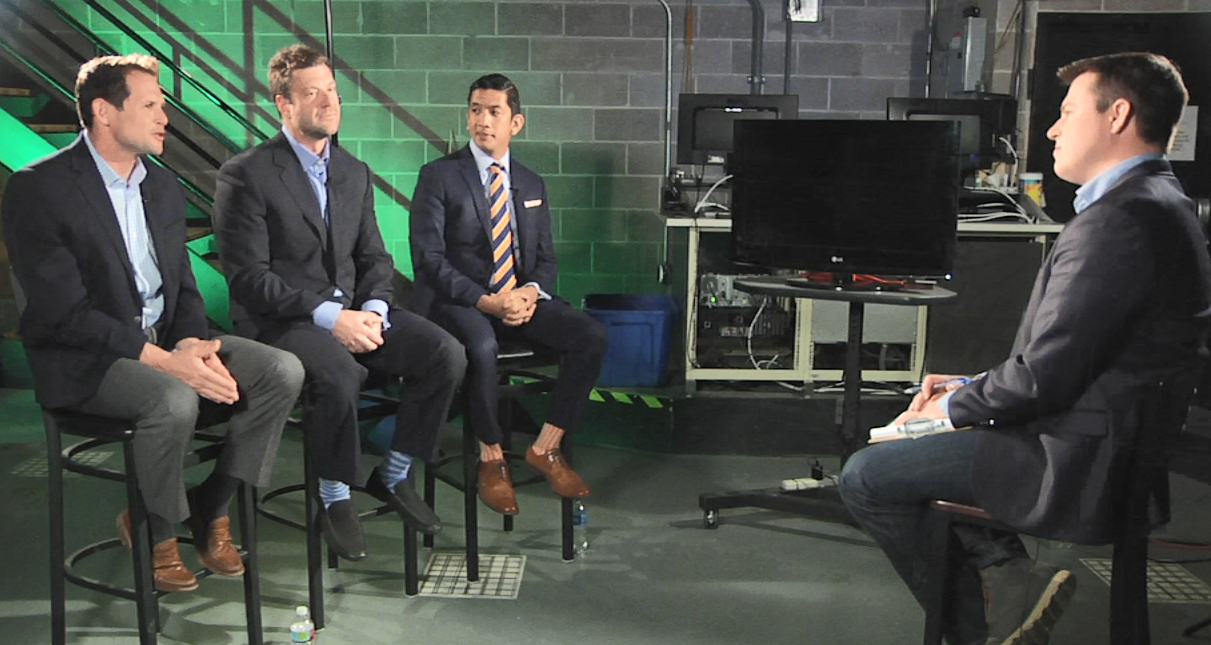 “We're talking about huge amounts of money being paid for something where the enthusiasm is ahead of the science right now,” said Dr. Ian Weber, an orthopedic surgeon. “I think when I see patients who get misinformation, you’re selling them a dream. And these seminars are very good at it, these radio ads are very good at it, but you’ve got to know the facts.”

Weber estimated he sees one to two patients every week who have paid for injections that did not ultimately help them enough to avoid surgery.

One such patient is Eduardo Dominguez, who said he spent $6,000 on a hip injection that didn't help him at all. He ended up getting hip replacement surgery performed by Weber.

Contact7 Investigates went undercover to watch how the clinics market their treatments to people looking for an end to their pain.

Contact7 Investigates attended two seminars put on by clinics affiliated with the Stem Cell Institute of America (SCIA). It describes itself not as a research facility but as a consulting company that provides its nationwide network of doctors with marketing materials that are frequently updated to comply with FDA guidelines.

Several websites linked to SCIA advertise about a dozen seminars held every week across the state where “space is severely limited.”

One local seminar attended by Contact7 Investigates was held in an event center in Littleton, another in a hotel conference room in Westminster.

Neither of the presenters said they were licensed medical professionals. They spoke to rooms of mostly older individuals, many who raised their hands when asked if they deal with daily pain.

In each seminar, the presenters detailed traditional medical treatments for pain – medications they said could be dangerous, surgery they said could kill you for simply living with the discomfort.

“Has a doctor ever told you, 'You'll just have to live with it? That it's your age? That it's the weather?' I've had a lot of people tell me doctors have told them there's absolutely nothing they could do,” one presenter told the audience. “Why do doctors tell you these things? It's because they don't know what else to do for you."

The pitch then switched to describe the regenerative properties of amniotic stem cells. In one presentation, audience members were encouraged to read a lengthy list of conditions the presenter said injections could effectively treat. 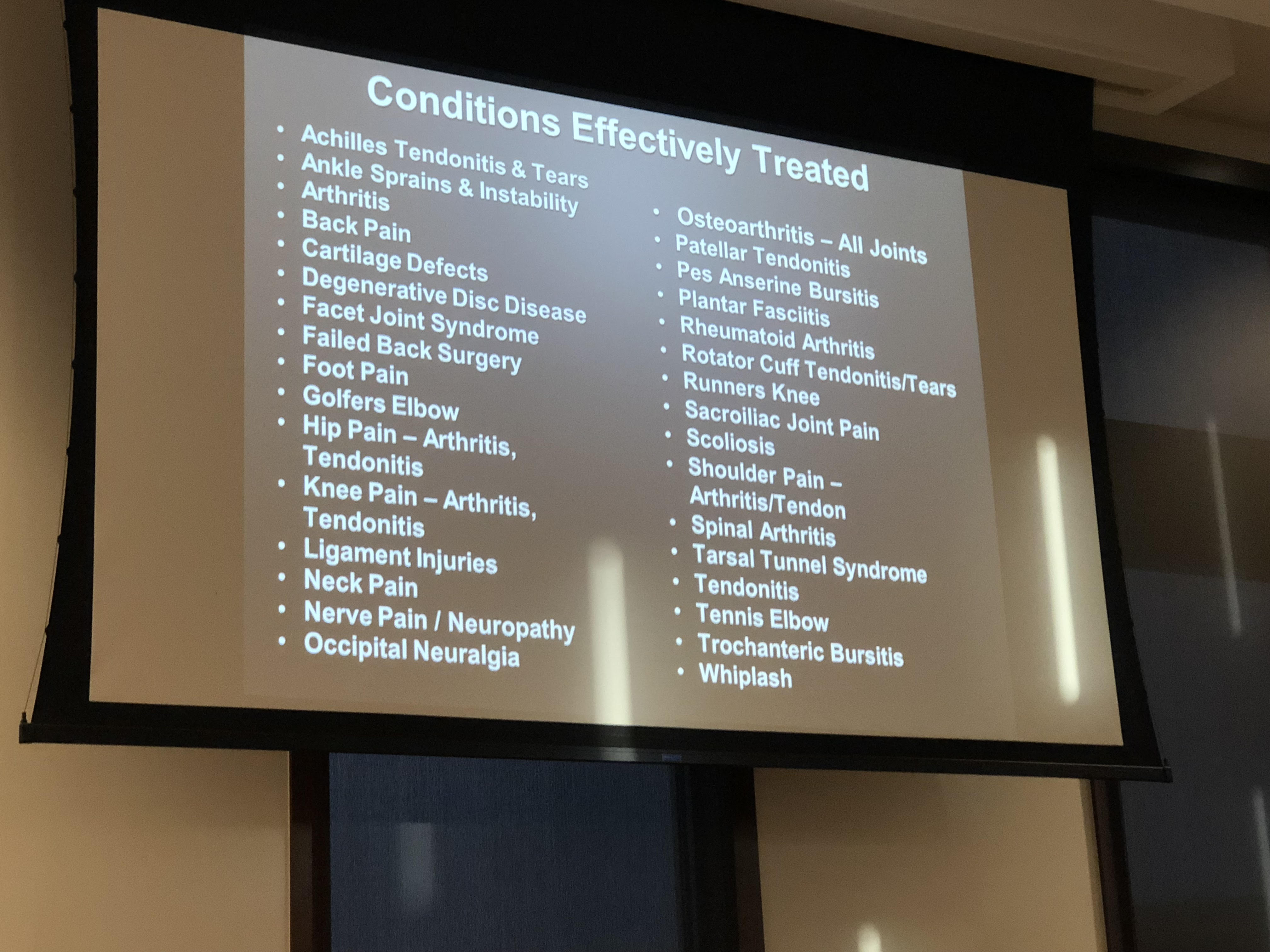 The Stem Cell Institute of America told Denver7 there is debate about whether or not the amniotic injections being given by many clinics contain live stem cells, and said it was looking further into the science.

“Until we know definitively, we do not recommend that our clinic directors state that amniotic injectables contain live stem cells or that they don't, but that amniotic has a particular quality of cells and growth factors which create healing activity,” SCIA said in a statement to Denver7 in October.

SCIA has not responded to a follow-up inquiry about whether or not its guidance to providers has changed.

When the presenters revealed the injections can cost anywhere from $6,000 to $10,000 each and are not covered by insurance, they explained the price by launching attacks on familiar targets: insurance companies and “Big Pharma.”

“Pharmaceutical companies are actually in the process right now of trying to patent stem cells. Do you know what happens if they go through with that? Each and every one of us will be owned by pharmaceutical companies because we all own stem cells, they're all inside of our bodies, which means Big Pharma has the right to take your stem cells whenever they want to,” a presenter told the audience. "They want as much money as possible.  They want to be the only ones that are able to sell anything related to health care."

The presenters then told the audience they had the opportunity to sign up for a free consultation at the clinic and offered discounts that would be available for signing up the same day of the event.

Presenters took questions from audience members after the seminars. When an undercover Contact7 producer asked one presenter if the results from injections are guaranteed, she responded:

“There's not a guarantee, but they do such a thorough job of screening people prior to recommending it to them that that's how we have a 96-percent success rate. We really don't have anybody that it hasn't worked for. … Really, there's not anyone that's unhappy with their results,” she said.

“These are very scary claims and I just can't believe what I saw,” Dr. Weber said after leaving the presentation. "This is an absolute shakedown in which you're taking advantage of people's high hopes of something that may have potential in the future based on basic science research, but it hasn't been clinically-proven in any of these situations and taking these people for $6,000 a pop."

Seminar attendees encouraged to sign up for free consultations

After that seminar, a Contact7 Investigates producer signed up for a free consultation at West2North Medical Solutions at the chiropractic clinic’s office in downtown Denver.

Upon arrival for the consultation, the Contact7 producer was led into an X-ray room to take images of her knees.

The producer, who is in her 30s, spoke with a patient educator and described having aching pain in one knee occasionally after running. 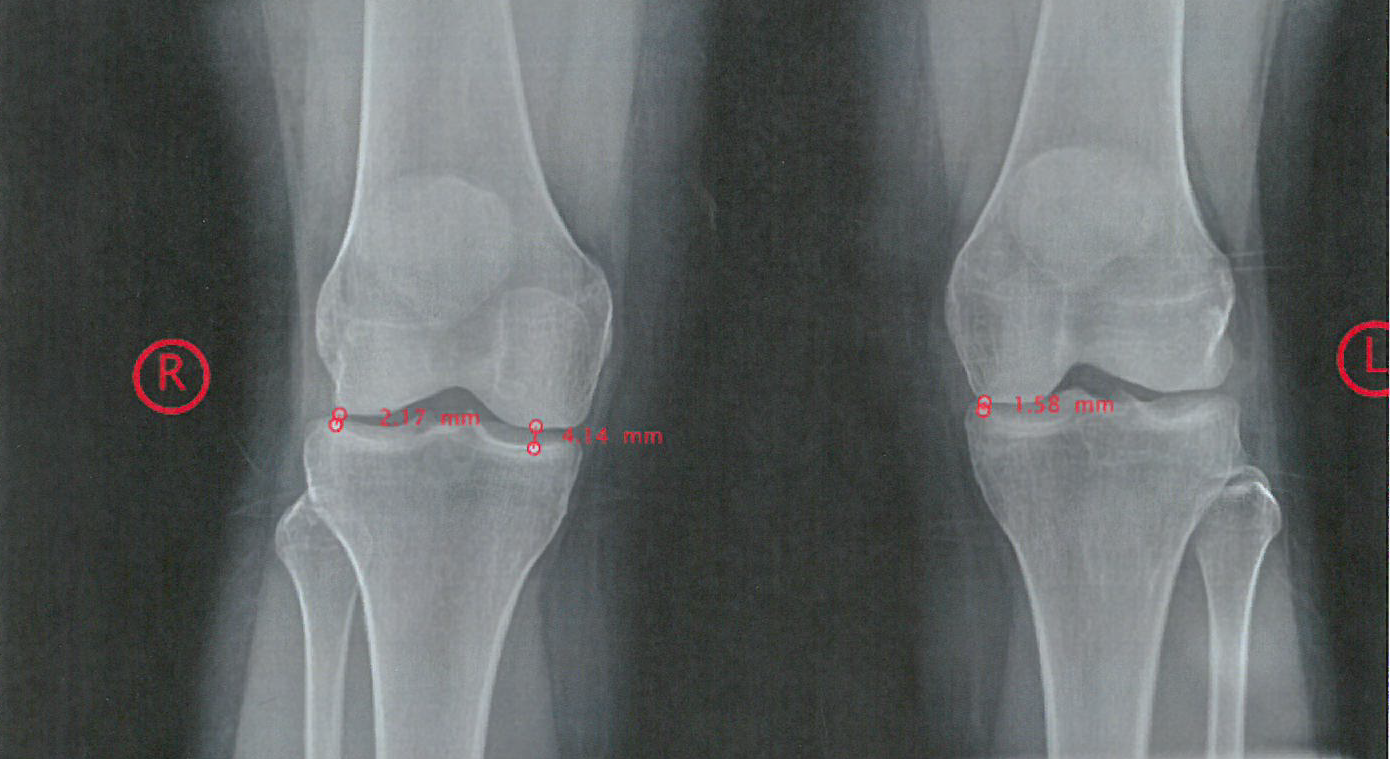 Within minutes, the patient educator showed the Contact7 crew the producer’s X-ray and said the images showed degeneration in both knees.

The patient educator recommended stem cell injections in both knees – at the total cost of $10,800 – reflecting a 10 percent discount for attending the promotional seminar.

A search of the state's licensure database did not show the patient educator holds any professional licenses. She said the injections would be administered by a licensed nurse practitioner.

“My fear is we take care of the right knee, take care of the one that's having the most problems, and then you start having the problem with the other one because we're already degenerated,” the employee told the producer. “That's what stem cells are good at doing, getting in there, rebuilding that cartilage so that we're not having this pain, not having that overall stress.” 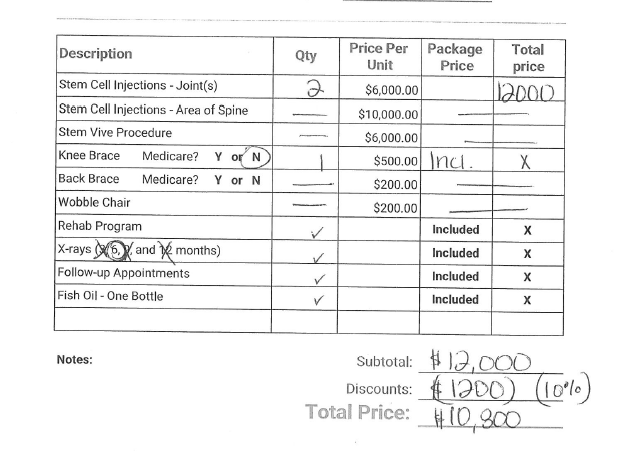 Orthopedic doctors told Denver7 there is no solid evidence yet that stem cell injections can repair such degeneration.

“There’s no evidence to say that any of this stuff regrows cartilage,” Dr. Efren Caballes said.

West2North’s website includes videos of patients saying the treatments helped their pain. The orthopedic doctors who brought their concerns to Denver7 said it's possible the injections can offer some measure of pain relief so their practices also offer stem cell injections – but they don’t promise it could repair arthritic joints.

West2North agrees to repay customers, stop injections in another state

West2North employees made no mention during the consultation or seminar of enforcement actions handed down by the North Dakota attorney general just days earlier.

The attorney general’s filing mentions “multiple sales presentations at hotel meeting room venues or other locations for the purposes of advertising and soliciting the sales of stem cell injections” and says the state believes claims made in those presentations are “untrue, misleading or unsubstantiated.”

The filing mentioned specific claims made in sales presentations the state believed were unsubstantiated including:

West2North agreed to stop engaging in any stem cell injections in the state of North Dakota “unless the stem cells or stem cell products are compliant with any Food and Drug Administration requirements for use.” 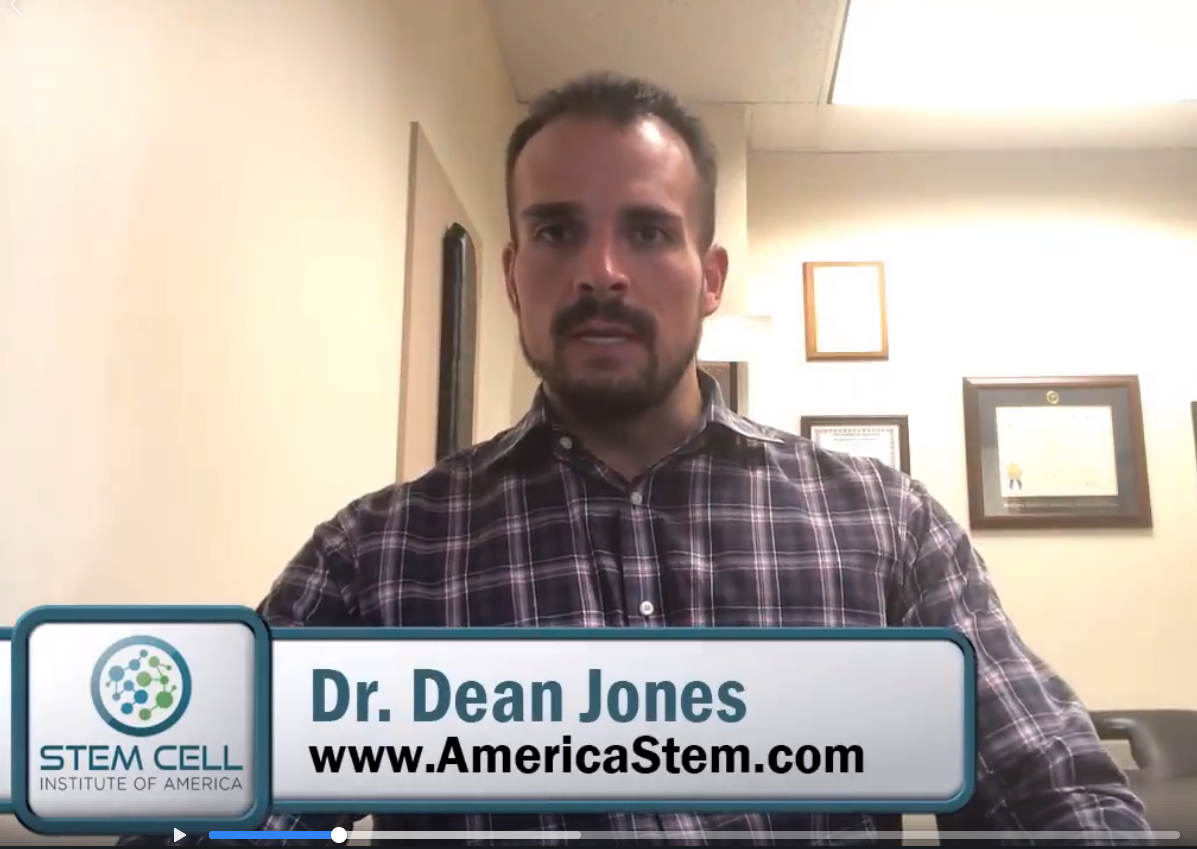 “To prevent a very lengthy and expensive battle in court to defend our position and since we now have alternative stem cell therapy that is not subject to FDA regulation, we have agreed to refrain from using those products,” Jones wrote in an email.

Jones declined Denver7’s requests for an interview, instead forwarding a link to a documentary about stem cells that he said costs $300 for the public to view.