Thousands of educators across the state plan to walk out of the classroom this week to protest what they consider low pay and neglectful education funding.

DENVER — Thousands of educators across the state plan to walk out of the classroom this week to protest what they consider low pay and neglectful education funding.

Teachers plan to rally at the state Capitol Friday, impacting approximately 502,000 students as the state’s largest school districts cancel classes ahead of the walkouts.

Teacher pay has become one of the biggest issues in 2018. Teachers and unions from West Virginia and Oklahoma have successfully rallied for bigger paychecks.

What do teachers want?

Teachers participating in the walkouts across Colorado are pleading for higher wages, better PERA funding and more money and support for public education.

Colorado's rapid growth has also resulted in more students in the classroom. The Colorado School Finance Report found public schools added 9,000 new students in the last two years, which should mean increased funding, but not in Colorado.

The latest figures from the U.S. Census Bureau, Education Week; Quality Counts, and the National Center for Education Statistics (NCES) show Colorado ranks 42nd in how much it spends per student, roughly $2,500 less than the national average.

Which means despite being the nation's 12th richest state, our public schools land at the bottom of the list for both per pupil spending and teacher pay.

Among the other reasons some Colorado teachers will participate in Friday's "Day of Action" come from concerns about their retirement. More than 560,000 state employees depend on PERA – The Public Employees Retirement Association – for their pension, including teachers.

The state teachers’ union has concerns about raising the retirement age and supports a plan where employees or employers would have to put more into the fund.

Will there be school on Friday?

In all, the state’s 10 largest districts will be closed one day or the other. Approximately 502,000 students attend those districts, according to state Department of Education records.

There are approximately 30,000 teachers who work in those 10 districts, though it’s unclear exactly how many of those teachers plan to take paid leave days to participate in the rallies.

Here are the Colorado school districts that have canceled classes because of the walkouts: 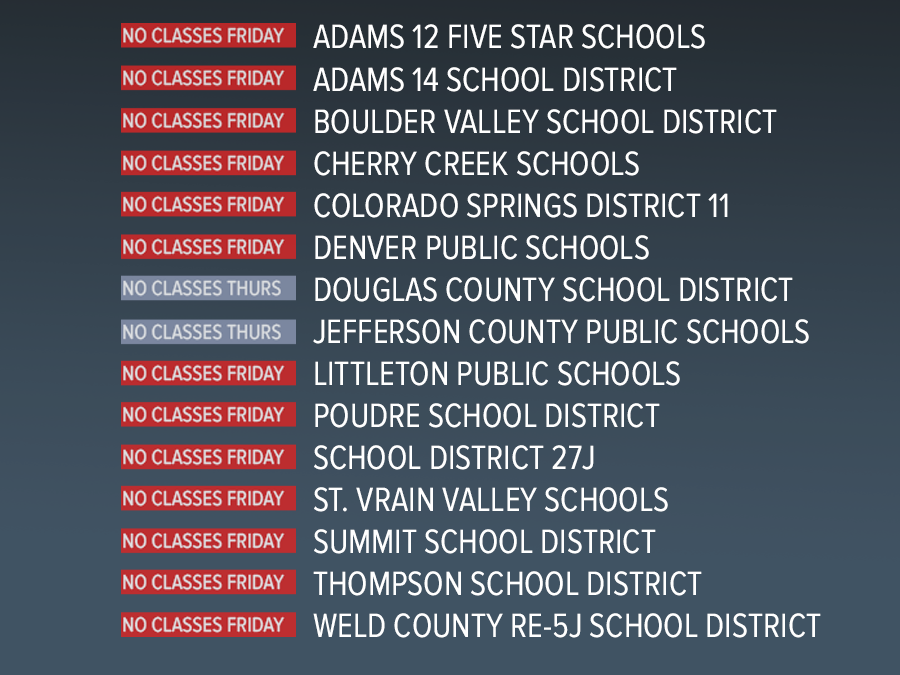 Although the planned teacher walkouts this week are not a strike, some state lawmakers are working to make sure any plans to do so doesn’t go unpunished by introducing a bill in the Senate that could put teachers in jail for speaking out.

A failure to comply with the injunction would “constitute contempt of court,” and teachers could face not only fines but up to six months in county jail, the bill language reads.