Colorado horses sold for slaughter, even when rescues want to help

FRANKTOWN, Colo. -- Colorado animal rescues say they are losing out on opportunities to find new homes for abandoned horses because they have to engage in auction bidding wars with horse traders who intend to sell the animals for slaughter.

But horse traders say that’s just how business works and there just aren’t enough rescues to care for all of the unwanted horses in Colorado.

While horse slaughter is illegal in the United States, it is clear Colorado horses are still being sold for meat – and people on both sides of this issue are asking whether the American ban on slaughter needs to be reconsidered. 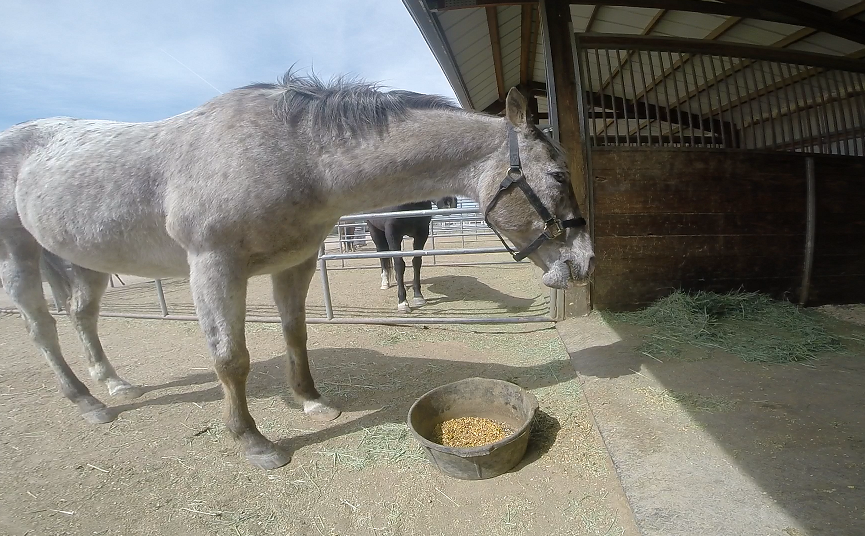 Rescue leader Andrea Mena estimates her organization has spent something close to $50,000 in donations, just in the last year, at auction trying to keep horses out of the hands of “kill buyers.”

"We're putting rescue money to outbid other buyers,” Mena said. “We're outbidding the horse traders that come through to make sure they get a good home."

Mena said the money could otherwise be spent to help a lot more animals, train them and help them find good homes.

At weekly auctions, horses are sold right alongside cattle, hogs, sheep and pigs -- all sold by the pound.

"There are the folks who are in the livestock business that see them as a piece of meat, because in other countries that's what they are,” Mena said. “We see them as a symbol of the west, we see them as companions, we don't necessarily see them as food."

Rescue groups attend the auctions and post photos of the soon-to-be-sold horses on Facebook in the hours before the auctions begin.

If anyone in the group is interested in bidding on a certain horse they can bid online or ask a rescue representative present at the live auction to bid on their behalf – but often they find they just can’t spend as much as a horse trader can. 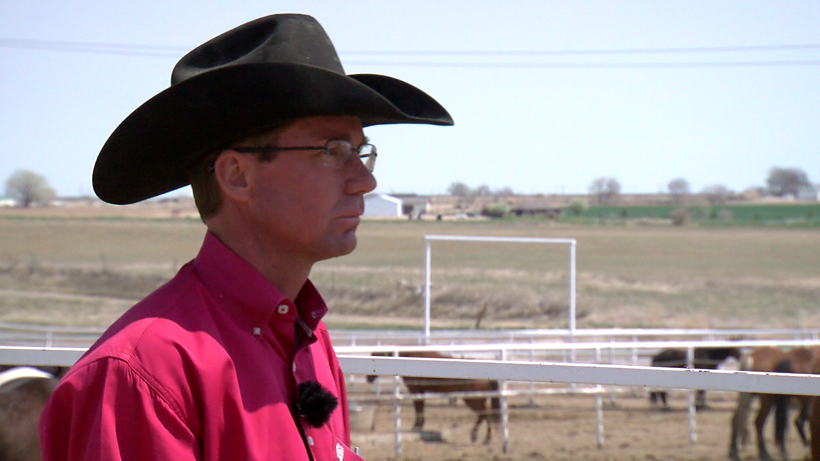 One of the people the rescue often finds itself trying to outbid is Jason Fabrizius. He openly admits to regularly buying horses he knows rescues want to save.

Fabrizius said horse trading has been his family’s business for a long time. He says he ships about 34 horses to Mexico every week.

“These horses show up, there's no place for them to go. The rancher's done using them. The backyard person is done petting them. They come to a public auction, I buy them, and I buy them by the truckloads. And we send them to Mexico," Fabrizius told Denver7.

Fabrizius set up a Facebook page for his ranch where people can buy horses from him and save them from slaughter – marked up from the price he paid at auction.

Some horse lovers refuse to do business with Fabrizius – arguing that buying horses from him only keeps his business going.

But others launch fundraisers to race against the clock and buy horses from the “kill pen” before they are shipped off.

“Do I enjoy sending all these things here to slaughter? No. I want to rescue them. I want them to be re-homed. But we can't re-home them all," Fabrizius said. “Everybody's going to look at this and say, 'Oh, that guy's so mean...’ Would you guys rather see these things standing out there somewhere starving? And dying? Just dying of starvation? No!"

Some of those slaughter-bound horses are indirectly sent there by the state of Colorado. State law dictates that stray horses be sent to auction if their owners cannot be located.

State records show at least 60 stray horses have been turned over by the state to be sold at auction in the last two and a half years. The state does not keep track of the buyers, but it is safe to assume at least some of them may have ended up in Mexico. Fabrizius said he had a stray horse from the state at his ranch the day Denver7 interviewed him.

Rescues have argued that the state should at least give them a chance at saving the horses before forcing them to outbid kill buyers at auction. But the state says that does not work because of the way the law is written.

“The answer is because by statute we have to operate for the benefit of the owner. The only way to determine what's a fair price is to go to auction because auction establishes fair market value on the day of the sale," Whitney said. 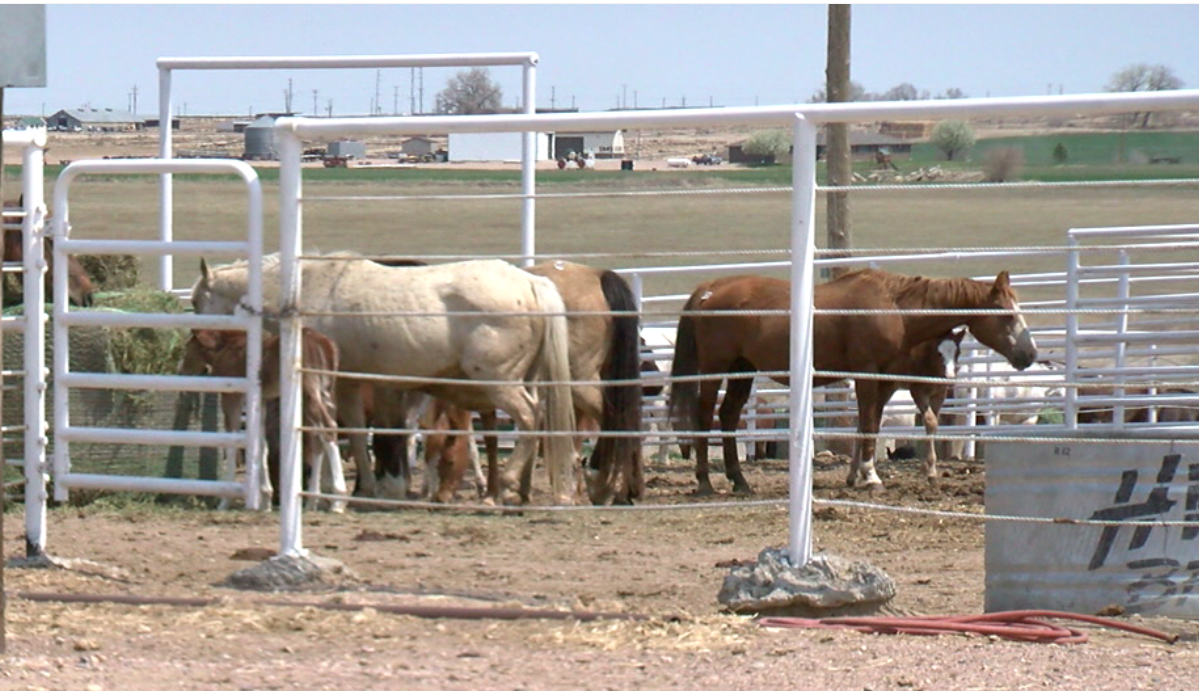 Mena and her horse rescue argue current U.S. laws do not do enough to protect horses. While the animals cannot legally be slaughtered in the United States, there is nothing illegal about shipping American horses across the border.

The American Society for the Prevention of Cruelty to Animals (ASPCA) has pushed to expand the horse slaughter ban to include making it illegal to export horses for human consumption.

“Horses bound for slaughter (who may include pregnant mares, foals and horses who are injured or blind) are commonly shipped for more than 24 hours at a time in crowded trucks without food, water or rest,” the ASPCA writes on its website.

“The problem with that is there's no regulation, so there's no oversight, there's no FDA making sure the horses are humanely treated or humanely euthanized,” Mena said.

Mena said if that ban is not going to be expanded, lawmakers should consider changing the law another way.

“For us, we actually see that bringing slaughter back to the United States would be the most humane option, which is kind of a strange thing to say," she said.

Fabrizius said prior to the ban his family trucked horses for slaughter in Nebraska. When horse slaughter became illegal in the U.S. in 2007, they began shipping them across the border to help meet demand.

"It's 240 miles, 4 hours to be on a truck [to Nebraska]. Today, we're trucking them things a thousand miles," Fabrizius said.

The horse trader described the process of selling across the border “miserable,” but he believes the horses he ships for slaughter are treated well.

“People think I abuse a horse? I can't abuse them. If the horses are tore up, I cannot send them to Mexico. I got to have them healthy,” Fabrizius said. “They are slaughtered humanely.”

For now, Mena said her rescue's goal is to start to cut off the slaughter supply by offering resources to help horse owners who can no longer care for their animals or no longer want to, and re-home the animals before they ever go to auction.

"Ultimately, we want to circumvent that slaughter pipeline, so prevent the horses from ending up at an auction and ending up at a feedlot," she said.