A Chinese space station is plummeting towards Earth Sunday night; will debris crash in Colorado?

Copyright 2018 Scripps Media, Inc. All rights reserved. This material may not be published, broadcast, rewritten, or redistributed.
NASA
<p>IN SPACE - AUGUST 21: In this NASA handout, the umbra, or moon's shadow, passes over Earth during the total eclipse Monday, August 21, 2017. Viewing the eclipse from orbit were NASA's Randy Bresnik, Jack Fischer and Peggy Whitson, ESA (European Space Agency's) Paolo Nespoli, and Roscosmos Commander Fyodor Yurchikhin and Sergey Ryazanskiy. The space station crossed the path of the eclipse three times as it orbited above the continental United States at an altitude of 250 miles. (Photo by NASA via Getty Images)</p>
By: Oscar Contreras
Posted at 1:44 PM, Apr 01, 2018

DENVER – A Chinese space station is expected to plummet back to Earth Sunday night, but are what the chances Colorado could be hit by its falling debris?

That’s an important question to ask because while most of the space station is expected to burn up during re-entry, there is some concern that debris could make landfall.

Some states, like Michigan, went as far as activating the state’s emergency operations center earlier this week to monitor the re-entry of China’s Tiangong-1 space lab.

The latest information from the European Space Agency (ESA) has a re-entry forecast time for the Tiangong-1 space station centered at around 7 p.m. MDT, give or take a couple of hours.

Early Sunday morning, SATFLARE forecasters, who are tasked with tracking all satellites orbiting Earth in real time, had put the space lab’s path of re-entry in a band stretching from northern California, southern Nevada, central Arizona, southern New Mexico and west Texas. The state of Colorado was excluded from the re-entry path. 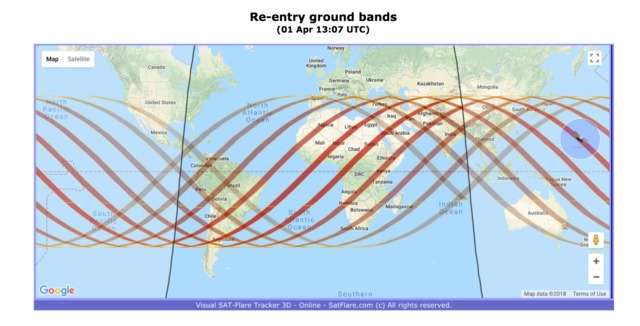 By Sunday afternoon, North America altogether was excluded from the space station’s path of re-entry. 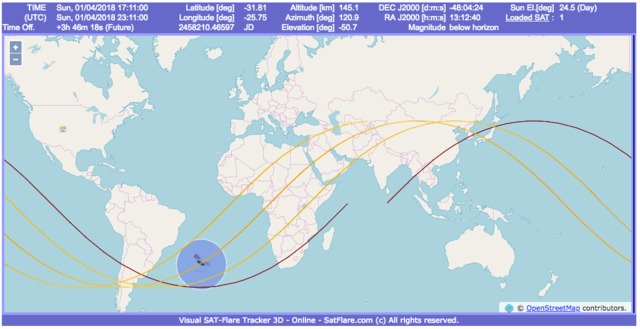 Scientists have emphasized the danger of being hit by falling debris is tiny, as low as one in 1 trillion, as the structure is likely to burn up in the atmosphere during re-entry.

"There is no need for people to worry about its re-entry into the atmosphere," an article by the China Manned Space Engineering Office published on state media said.

"It won't crash to the Earth fiercely, as in sci-fi movie scenarios, but will look more like a shower of meteors."

Despite the predictions and forecasts, scientists still warn that it's very hard to predict a precise location of re-entry for any satellite orbiting earth.

The Tiangong-1 was launched in September 2011 as a prototype for China's ultimate space goal: a permanent space station which is expected to launch around 2022.

But the Chinese government told the United Nations in May 2017 their space lab had "ceased functioning" in March 2016, without saying exactly why.

NASA's first space station, Skylab, fell to Earth in an out-of-control re-entry in 1979, burning up harmlessly in the process.

The last space outpost to drop was Russia's 135-ton Mir station in 2001, which made a controlled landing with most parts breaking up in the atmosphere.

According to CNN, space debris could contain hydrazine, a highly toxic and corrosive substance. Officials have said in the past that any suspected space debris should be considered hazardous.

International law and the United Nations Office for Outer Space Affairs (UNOOSA) Rescue Agreement state that you must immediately report any space debris that may crash in your property to local authorities, as “recovered space objects belong to the owner and governments are obliged to return them,” an ESA official said Sunday.

CNN contributed to this report.